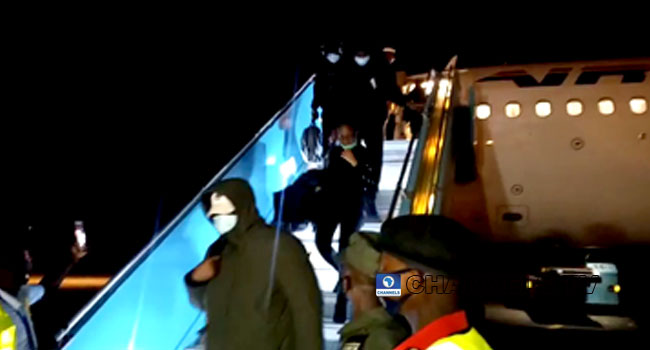 The Federal Government yesterday said 122 persons plus an infant from Warsaw, Poland will arrive the Nnamdi Azikiwe International Airport today, Friday, March 11, 2022 at the estimated time of 12:40am aboard Air Peace..

In a statement made available to newsmen by spokesperson of the Ministry of Foreign Affairs, Mrs. Francisca K. Omayuli, said, “In continuation of the evacuation exercise, the second flight comprising 122 persons plus an infant from Warsaw, Poland will arrive the Nnamdi Azikiwe International Airport on Friday, 11th March, 2022 at the estimated time of 12:40am aboard Air Peace.

So far, a total number of 1,076 Nigerians fleeing the crisis in Ukraine, have been evacuated back to Nigeria. The evacuees will be received at the airport in Abuja by Edward Adedokun, Director, Search and Rescue of the National Emergency Management Agency (NEMA); officials of the Nigerians in Diaspora Commission (NiDCOM), and the National Drug Law Enforcement Agency (NDLEA).

The talks come after Russia bombed a children’s hospital, which Ukraine said was a “war crime”.

Officials say three people including a child died in the attack in the south-eastern city of Mariupol.

Russia launched a full-scale invasion of Ukraine two weeks ago and more than 2.3 million people have since fled the country.

The worst humanitarian situation was in Mariupol, Mr Kuleba said, where residents have been trapped for days in freezing temperatures without electricity or water.

But Russia had not committed to establishing a humanitarian corridor there and had also not responded to proposals for a 24-hour humanitarian ceasefire across Ukraine, he said.

For his part, the Russian foreign minister offered no concessions and repeated demands that Ukraine be disarmed and accept neutral status. Moscow was waiting for a reply from Kyiv, he said.

Mr Lavrov also accused the West of fuelling the conflict by supplying weapons to Ukraine.

Russia would cope with Western sanctions and “come out of the crisis with a better psychology and conscience”, he said.

“I assure you we will cope and will do everything not to rely on the West ever, in any areas of our lives,” he said.

Russian President Vladimir Putin has said sanctions imposed against Russia would rebound against the West, including in the form of higher food and energy prices, and Moscow would solve its problems and emerge stronger.

Putin said there had been no alternative to what Russia calls its “special military operation” in Ukraine and that Russia was not a country that could accept compromising its sovereignty for some sort of short-term economic gain.

“These sanctions would have been imposed in any case,” Putin told a meeting of the Russian government yesterday. “There are some questions, problems and difficulties but in the past we have overcome them and we will overcome them now.

“In the end, this will all lead to an increase in our independence, self-sufficiency and our sovereignty,” he told a televised government meeting two weeks after Russian forces invaded neighbouring Ukraine.

His comments were designed to portray Western sanctions as self-defeating and reassure Russians that the country can withstand what Moscow is calling an “economic war” against its banks, businesses and business oligarchs.

Putin said Moscow – a major energy producer that supplies a third of Europe’s gas – would continue to meet its contractual obligations even though it has been slammed with comprehensive sanctions including a ban on United States purchases of its oil.

“They announced that they are closing the import of Russian oil to the American market. Prices there are high, inflation is unprecedentedly high, has reached historic highs. They are trying to blame the results of their own mistakes on us,” he said. “We have absolutely nothing to do with it.”

Hitting back against the West, the Russian government said earlier that it had banned exports of telecom, medical, auto, agricultural, electrical and tech equipment, among other items, until the end of 2022.