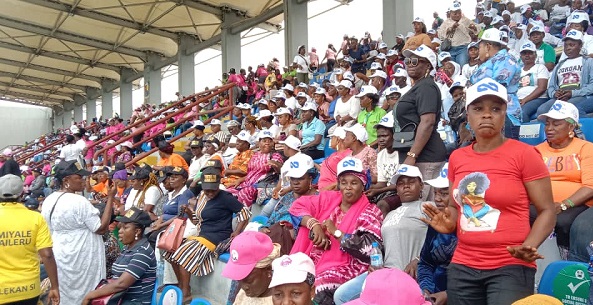 Women’s wing of the Lagos state chapter of the All Progressives Congress (APC), on Monday, staged a solidarity walk to support the party’s presidential candidate, Bola Tinubu, and the second term bid of Lagos State Governor, Babajide Sanwo-Olu.
The walk, according to its organizer, Lagos APC women leader, Hon Jumoke Okoya-Thomas, was held to galvanize support for the party’s presidential candidate, Bola Tinubu, the Lagos state governor, Babajide Sanwo-Olu, and other candidates of the party in the 2023 general election.
The rally had a massive representation of women members, party chieftains, associations of market men and women from the 20 Local Government Areas, and 37 LCDAs across the state.
With the massive turnout, Governor Babajide Sanwo-Olu, in his address, said women have shown that they own the votes.
He commended the organizers of the walk for a successful outing, saying, “Lagos APC is a party of choice. Take the message home APC in Lagos state is a party of choice. This is just a sample. You have shown that women have the votes. You have shown that you run the show. Our presidential candidate, Senator Bola Tinubu, and his vice, Senator Kashim Shettima, are very appreciative of what you have done today.
“I want you all to spread the message that APC is the party of choice. I, therefore, congratulate the women leader, Hon Jumoke Okoya-Thomas for putting this up. It is indeed a show of strength by our women and I am certain, we shall surely emerge victorious.
“Thank you all for coming out in large numbers to show support for our presidential candidate. This has shown that women are at the forefront of the campaign. This is something you have done on your own and this has shown that women are the voters. We don’t just talk; we have shown that our women are the real voters.”
Lagos state deputy governor, Dr. Obafemi Hamzat, advised the women to ensure they collect their voter cards to be able to exercise their franchise.
While expressing gratitude to the women for massively supporting the candidates, he added, “This is how God created the world. Women are in large numbers and that is how God wants it to be. We are all happy with the massive turnout. This is how we want it to be. We don’t lie. We don’t give false statistics. It is so easy to lie. Lagos is not trial and error.
“They lie that Tinubu is dead but Tinubu is not dead. He is hale and hearty; I spoke with him this morning. He is steady, stable, and ready. And we are moving straight to Abuja because it’s the turn of Asiwaju. It is his turn because he is a pathfinder. He knows the path and he has proven that with his achievements in Lagos state when he was governor. We want a better Nigeria that is why it is his turn. He is competent.
“Let us get our PVC intact and for those that are yet to collect their PVC, go and collect it at the INEC office to be able to vote on Election Day.”
Reacting, Executive Chairman, Itire-Ikate LCDA, Hon (Dr) Ahmed Apatira, described the turnout as overwhelming and an assurance of victory for the party’s presidential candidate, Senator Bola Tinubu, and Governorship candidate, Babajide Sanwo-Olu and other candidates of the party in the forthcoming election.
He said, “Lagos APC women are massively represented here today. Our women from Itire-Ikate LCDA were not left out in the walk and show of support. My joy is indescribable. We are closer to actualizing our dream of a better Nigeria. This is a project that God has ordained because the time is right for Tinubu’s presidency and another term in office for Governor Babajide Sanwo-Olu.”