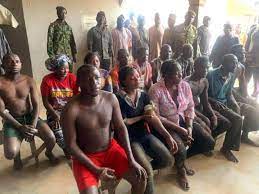 The remaining 29 students abducted from the Federal College of Forestry Mechanisation, Afaka in Kaduna State have regained freedom.

Mr Abdullahi Usman, who is the Chairman of the Parents’ Committee, confirmed the release of the students by bandits to News Reports on Wednesday in Kaduna.

He explained that the victims were released some minutes past 4pm around the Kidanda area in Giwa Local Government Area of the state, and were on their way back to the state capital.

Usman, however, refused to disclose the amount paid as ransom to the bandits for the release of the students.

Bandits stormed the school in Igabi Local Government Area very early on March 11 with the intention to abduct many students.

While they were on a mission that could be described as a silent attack, a student who sighted them raised an alarm – causing tension in the school.

Soldiers in the area promptly responded to a distress call and engaged the bandits in a fierce gunfight in a bid to thwart the attack.

The action of the security operatives led to the rescue of 180 people, comprising 132 male students, 40 female students, and eight civilian staff.

Despite the intervention, the bandits still abducted 23 female and 16 male students, leaving their parents in despair with calls on the government to rescue them.

Sadly, one of those missing was a female student, Fatima Shamaki, whose father died from a heart attack after the news of her abduction was broken to him.

The bandits had released videos in which they made some demands and threatened to kill the students should their demands were not met.