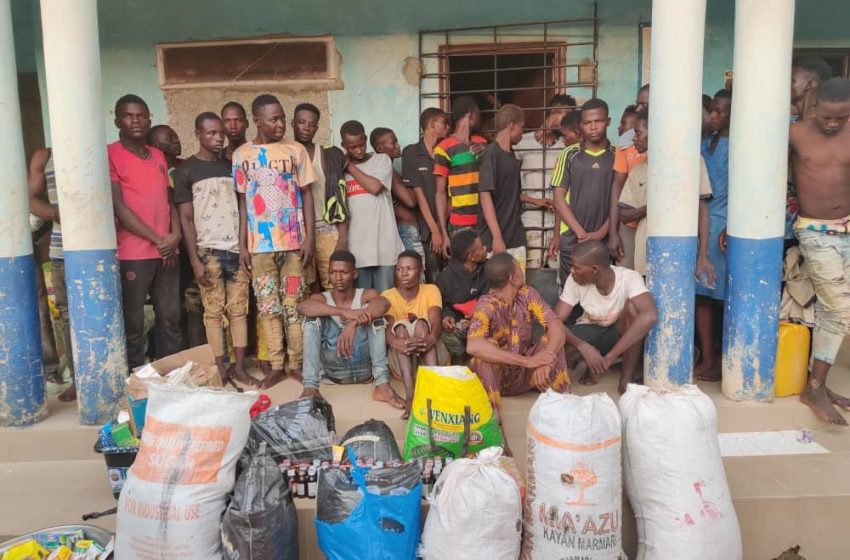 137.55 kilograms of cocaine, skunk, others seizedOperatives of the National Drug Law Enforcement Agency, NDLEA, havelaunched fresh raids in Nasarawa, Benue and Ondo states where no fewer than
43 dealers and consumers of illicit substances were arrested and 137.55kilograms of assorted drugs recovered during the ‘offensive action’In Nasarawa state, NDLEA operatives backed by a detachment of soldiers from
177 battalion of the Nigerian Army, Keffi, raided notorious drug joints located inKara Masaka, Ruwa Ruwa Uke, Abattoir at the border with FCT, Filing Bala,Masaka U- Turn and others for two consecutive days; 5th and 6th August 2021.
During the raids, at least 41 suspects were arrested and assorted drugs such ascocaine, cannabis sativa, cough syrup with codeine, rohypnol and tramadol witha total weight of 65.250kg recovered from them.
Cannabis plants planted by the drug dealers in the adjoining bushes weredestroyed while all the stalls in the drug markets were dismantled and set
ablaze.In the same vein, operatives of the Ondo state command of the Agency in theearly hours of Monday, 9 th August, 2021 raided Odopetu area of Akure in Akure
South local government area of the state capital, where a 44-year-old Mrs. FolakeAdemola was arrested while her husband escaped arrest.
Recovered from their home include: 65.400kg of cannabis sativa; skunk –500grams; loud- 16grams; Colorado- 34grams, bringing the total of drugs seized
from them to 65.950 kilograms.In Benue state, a 34-year-old Iornum Emmanuel was arrested at the NDLEA
Aliade checkpoint on Sunday 8 th August, 2021 with different quantities ofassorted illicit drugs, which include; tramadol -500grams; diazepam- 1.5kg andexol 5- 7.9kg.
Chairman/Chief Executive of the NDLEA, Brig. Gen. Mohamed Buba Marwa(Retd) has commended the commanders, officers and men of the Nasarawa,
Ondo and Benue state commands for their commitment to the goal of ridding thecountry of the menace of drug abuse and trafficking. He charged them and their
colleagues in other commands to continue on the offensive until the last drugcartel in Nigeria is dismantled.