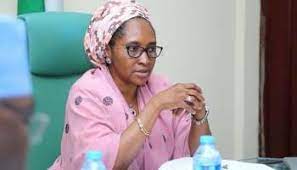 Controversy over claims by Edo State Governor, Godwin Obaseki, that the Federal Government printed N60 billion to augment March allocation from the federation account, took a different dimension yesterday, as the Minister of Finance, Budget and National Planning, Mrs. Zainab Ahmed, revealed that governors actually wanted to borrow money from the Central Bank of Nigeria, CBN, for the shortfall, saying government turned down the request. Governor Obaseki had said two weeks ago: ”When we got FAAC for March, the federal government printed additional N50-N60 billion to top-up for us to share.

“This April, we will go to Abuja and share. By the end of this year, our total borrowings are going to be within N15-N16 trillion.” This claim has generated much controversy in the polity, with the Federal Government insisting that the governor lied in his claim. Godwin Emefiele, governor of CBN, had also dismissed Obaseki’s claim, describing it as “unfortunate and totally inappropriate.” The development also pitted governors of ruling All Progressives Congress, APC, against their Peoples Democratic Party, PDP, counterparts weekend, with governors on both sides of the divide defending their own.

ut speaking on the issue in a Nigerian Television Authority, NTA, breakfast programme, Good Morning Nigeria, yesterday, the minister said the Federal Government turned down a request by state governors to borrow from the Central Bank of Nigeria, CBN, to augment the N50 billion federation account allocation committee, FAAC, shortfall in March. Ahmed said that whenever there was reduction in federal allocation, the Federal Government took money from some reserve accounts, but noted that in the case of March allocation which fell by N50 billion, all state governments were asked to manage their resources. She said:  “It is a difficult time, I can explain to you how difficult it is not just for the Federal Government but also for the state; we see increasing reduction in our FAAC revenue. “In the month of March, we had a shortfall at FAAC that is almost about N50 billion and we did not have enough accrual in any of those accounts. The states, to be honest, wanted us to borrow from the Central Bank but we resisted, we just told everybody to go back to live within what they had. “So it was very surprising for us when we heard a sitting governor saying that CBN has printed money for FAAC. That was very unfortunate because it is not true. “As a nation, the federal, state and local governments must review expenditure patterns. We are spending too much and we are not generating enough.” Mrs Ahmed noted that Nigeria emerged from its second recession in four years in the fourth quarter, but lamented that revenues remained subdued as a fall in crude prices curbed the main source of income for the nation. Ahmed said the government’s aim was to triple its revenue ratio to 15 per cent of gross domestic product. “After revenue collapsed during the last oil shock of 2015, Nigeria turned to the Central Bank, borrowing about a third of its debt to cover a budget deficit that tripled during that time,” Ahmed had said, adding that the government would limit deficit monetization and convert those loans into long-term notes.