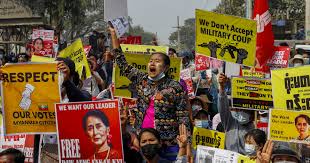 Myanmar’s military has ordered more arrests, with nearly 500 individuals facing charges or sentenced to jail in relation to the burgeoning protests and civil disobedience movement following the February 1 coup, as protesters return to the streets on Thursday following a massive demonstration the previous day.

Some 495 civilian political leaders, activists and protesters have so far been detained or charged, the Assistance Association for Political Prisoners (AAPP), which has been tracking detentions in the country over the past two weeks, said in an update on Wednesday night.Three people have already been convicted to two years in jail and a third for three months, the group said. Some 460 people remain in detention.

Among those arrested in recent days was a regional minister of environment in Mandalay, while four train operators and two others were reportedly taken at gunpoint by the military, and three were arrested by police in Rakhine.

Eight civil servants were also put on trial on Wednesday for going on strike as part of a growing civil disobedience movement.

It is unclear if the AAPP list includes six celebrities, who are said to have been charged for inciting strikes that have paralysed many government offices. Those charges can carry up to two years in jail.
Some of those detained were defiant.

“It’s incredible to witness that our people are unified. People’s power must return to the people,” actor Lu Min wrote on his Facebook page.

The Defend Lawyers website also reported that at least 40 barristers could face prosecution for participating in the anti-coup movement. Many of the country’s lawyers have join the Red Ribbon Campaign calling for the restoration of democracy in the country.

On Thursday, the demonstrators returned to the streets for the 13th straight day of nationwide protests against the coup leaders.