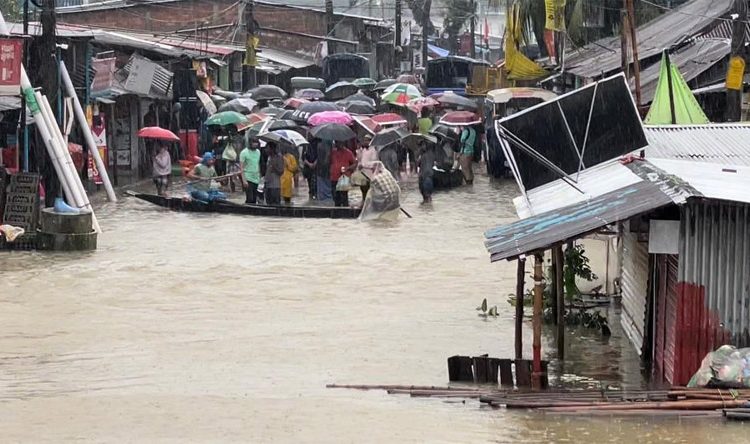 AS Nigerians continue to lament the severe impact of flooding across the country, the Federal Government yesterday disclosed that the disaster has so far killed over 603 persons, displaced 1,302,589 persons and destroyed over 108,393 hectares of farmlands across the country.

Expressing sadness over the loss of lives and destruction of property, the minister said, “The Ministry of Humanitarian Affairs, Disaster Management and Social Development is concerned that despite all our efforts of averting the consequence of the 2022 flooding season, unfortunately we have recorded the loss of over 500 lives, partial or total damage of more than 90,000 houses, damage of more than 140, 000 hectares of farmland, so many roads and other infrastructures were also affected.”

Responding to the devastating impact of the flood in his state, Bayelsa state Governor, Douye Diri yesterday urged the Federal Government to declare a national emergency on the disaster.

Diri, who made the appeal at an emergency security council meeting in Yenagoa, said that the essence of the meeting was to brainstorm with heads of various security agencies to assess the situation holistically and seek ways to mitigate the impact of the natural disaster.

Diri in a statement by his Chief Press Secretary, Mr. Daniel Alabrah,, lamented the magnitude of this year’s flooding, which he noted had surpassed that of 2012.

His words: “This year’s flooding has surpassed that of 2012, which is the highest we have witnessed so far. It has become a security emergency. Bayelsa is below sea level and when the flood comes, virtually everywhere is flooded. Even the Government House is being threatened.”

“As we speak, the Academic Staff Union of Universities, ASUU, has called off its strike. But as universities are opening, our own state university cannot open because the only road linking the university has been broken into three parts.

“The only road that links Opokuma and Sabagreia in Kolokuma/Opokuma Local Government Area and the only one also connecting Sagbama to Ekeremor that is still under construction has been broken. There is hunger and palpable tension in the state.”

THE Ughelli/Asaba expressway has been submerged as the ravaging flood continued to wreak havoc in more across Delta state, rendering more families homeless.

As the time of filing this report, about seven different spots on the busy Ughelli/Asaba expressway has been cut off by the menacing flood.

Some motorists who spoke to the Vanguard, said over eight cars have lost their engines, lamenting that the flood has made the road near impassable.

Also, more families have been rendered homeless and thrown into hardship as mores houses have been submerged in Asaba, Kwale, Ughelli, Aboh and Isoko axis by the flood.

Former Federal Commissioner for Information and South South leader,  Edwin Clark has taken a swipe at the Federal Government, asking it to stop blaming the Cameroonian government for being responsible for the problem, just as he warned that a great disaster looms in the country.

According to Clark, “Instead of blame game, one would have even expected a responsible government that swore to an oath, to see to the welfare of the people. to have taken steps to alleviate the sufferings, by building the Lagdo Dam in Benue State 10 (ten) years after the last disaster flood that ravaged the country in 2012.

“Unfortunately, the Federal Government seem to be nonchalant over the plight of the citizens in the Niger Delta. For instance, in Bayelsa State, there is a palpable case of humanitarian crisis. Most communities of the State, including majority parts of Yenagoa, the State Capital, are under water. The people of the State, who do not have where to go to, have resorted to some crude accommodation of pinning sticks inside the water, with a platform which they use as bed, made up of cellophane bags.

“The Federal Government has not done anything to reduce the plight and suffering of the people. The State Governor, Sen. Douye Diri, was on the news on Saturday, 15th October, 2022, visiting some of the affected communities. In his speech, while addressing the victims, the Governor stated that the Federal Government has not sent a kobo, nor any relief materials to the State. The Governor of Rivers State,  Nyesom Wike, also made similar statement a few days ago, when he made some donation to the flood victims in Rivers State.”

The current flood which has affected 31 states of the country and Abuja is the worst in  the history of Nigeria. Before now, the 2012 flood was the worst as rivers burst their banks and submerged vast lands in 30 of the country’s 36 states, killing over 400 people, displaced 2.1 million people, affected seven million others and caused N2.5 trillion damage, according to the Nigeria’s National Emergency Management Agency, NEMA.

The seriousness of the 2012 flooding, referred to as the most harmful in the last 40 years, was attributed to a combination of two events: very heavy local rainfall and the release of excess water from the Lagdo Dam in neighbouring Republic of Cameroon.

In 2013, heavy rains and floods, which started mid-July, affected more than 81,500 people across Nigeria. Almost 8,000 people were displaced and more than 6,500 homes were damaged. No fewer than 25 deaths were recorded and 2,217 farmlands were destroyed.

In 2017, NEMA said that 27 states experienced devastating flood disasters, in which no fewer than 90 people died. In 2018, death toll from rampaging flood across the country was 242. In 2019, a total of 277,555 people were affected by floods and 158 were killed. In 2020 the number of those affected by floods was 2,353,647 resulting in the deaths of 69 people, according to Muhammadu Muhammed, NEMA’s former head. In 2020, no fewer than 68 people died from flooding in various parts of Nigeria.

The Christian Association of Clergies in Nigeria, CACN, has described the fate of victims of flood disasters in Nigeria, particularly in Anambra state as pathetic, pitiable, painful and called on well-meaning Nigeria to come to the aid of the affected persons

The group in a statement jointly signed on their behalf by their National President, Archbishop Yiwa Orkwar and National Coordinator, Justice Alpha Ikpeama, CACN said the situation calls for both financial and material assistance for the victims.

“It is of great relevance for us to share in agony, pains, sufferings, predicaments and problems of the displaced and bereaved victims who are in dire need of our prayers, helps, comfort, encouragements and succours.  To put smiles in faces of the displaced persons, church leaders should raise funds in their churches in aid for upkeep of victims.”

Okowa, who described this year’s flood as very devastating, noted that the magnitude of the menace surpassed a similar occurrence in 2012.“The First lady who was at the Institute of Continuing Education, ICE, camp housing 1,437 IDPs and Oneh Primary School with 402 IDPs, told the victims to see the incident as an act of God, saying that God was all-knowing and would always do things as they suited Him.

She said: “I am here today to tell you that all hope is not lost because of the flood that has affected every one of you. Whatever God has created or allowed to happen, is good.“ So, rather than feel bad or keep thinking and become hypertensive, you should use this opportunity to glorify God and draw closer to Him.

“Some persons had had similar flood experience and did not survive it. So for you who are alive and are here in this camp, please thank God, for nobody can question Him.”

The relief materials were handed over to the flood victims at Abacheke field in Egbema and Girls Secondary School, in the Oguta area yesterday by the Imo state governor, Hope Uzodimma.

THE Campaign Organization of Olorogun David Edevbie,  a top gubernatorial contender in Delta State,  has sympathized with victims of the devastating flood in the state.

Director General of the campaign organisation,  Clement Ofuani, in a statement, in Asaba, said Olorogun Edevbie, was touched by the plight of the victims and wants assistance for them.

Ofuani described the flood as a national catastrophe judging by its devastating impact on the lives and property of victims and the environment.

The Watchdog for Progressive Ijaw, WPI, has lambasted the Niger Delta Development Commission, NDDC, the National Emergency Management Agency ,NEMA, and the Ministry of Niger Delta for their lack of preparedness to handle the ongoing flood disaster.

WPI particularly frowned on the nonchalant attitude, insensitivity and what it described as obvious lack of capacity being displayed by the NDDC leadership, at a time people of the region were urgently in need of the Commission’s intervention.

The group in a statement signed by its Spokesperson, Charles Taylor, lamented that despite all the warnings ahead of the flood, the NDDC leadership allegedly failed to prepare for it.