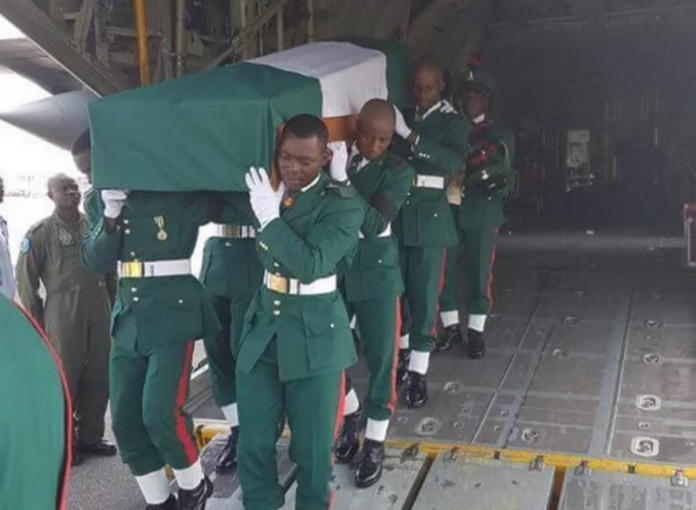 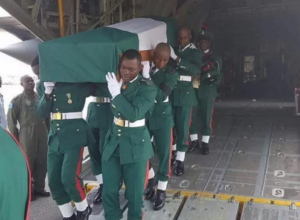 •President Says Sacrifices Won’t Be In Vain
THE sacrifices of fallen officers and men in the war against terrorism will never be in vain, President Muhammadu Buhari has said.
He said their memories would be eternally etched in the hearts and minds of fellow citizens for whose sake they laid down their lives.
The President was reacting to the death of Lt.-Col. Abu Ali, one of Nigeria’s finest and bravest soldiers.
Also, Chief of Army Staff, Lt. General Tukur Buratai, said the death of Lt.-Col. Ali in the hands of Boko Haram terrorists was an eye-opener in the fight against insurgency.
Buhari, in a condolence statement by his Senior Special Assistant on Media and Publicity, Malam Garba Shehu, said he was shocked by the news of the officer’s death with other gallant soldiers during an encounter with Boko Haram bandits in Borno State.
According to the President, “a courageous commander does not only give orders, but also joins his men to fight the battle; no matter the risks or the obvious danger.”
He explained that the late colonel “was an extraordinary officer, who inspired respect and adoration among those he commanded”, adding that “one of the greatest attributes of a war hero is the ability to help your troops overcome fear in the face of danger.”
The President said the late colonel and his fallen colleagues brought glory to the Army and the country for laying down their lives for others.
He noted that their heroic sacrifices were “so immeasurable that no words can do justice to their patriotism and remarkable courage”.
Buhari, who called on the late Col. Ali’s father, Brigadier-Gen. Abu Ali (rtd) to console the family, promised that the death of his son and others in battle would never be in vain.
“He was a gallant soldier, never to be forgotten. He has brought a good name to the family,” said the President.
He called on members of the Armed Forces not to let the tragic incident dampen their morale and spirit, adding that under no circumstances should Boko Haram terrorists be allowed to destroy the will of Nigerian troops.
“Evil should not be given any chance to defeat good and humanity” and that “members of our Armed Forces should remain formidably united in the war against terrorism”.
The President has appointed a high-powered delegation, led by Chief of Staff Abba Kyari, with Minister of Federal Capital Territory Mohammed Bello and Minister of State for Mines and Steel Development Abubakar Bwari to represent him at the funeral of Col. Ali and others.
Buratai spoke when he appeared before the Senate Committee on Federal Capital Territory (FCT) to defend acquisition of disputed lands in the Maitama District Territory, by the Army.
He noted that utterances by highly placed individuals were posing serious threats to national security.
The Army chief said one officer, six soldiers and one naval rating were killed in the ambush.
He said: “I want to tell you that the fight against Boko Haram insurgents is a matter of concern to everyone and what we are going to witness today at the burial ceremony should be an eye-opener.
‘Although we have several cases of soldiers in battle fields in the past, at this point in time, it calls for proper scrutiny because of the responses by individuals and indeed organisations to national defence and security issues.
“We must take the issue of defence and security seriously so that collectively we would fight these insurgents to its final conclusion,” the Army chief said.
Giving reasons for acquisition of the 238 hectares within the Maitama district extension, Buratai said: “We need to relocate headquarters of the military office. The current location is not so convenient for us.”

Watch The Funeral Service Of Lt. Col Abu Ali And The Other Fallen Heroes