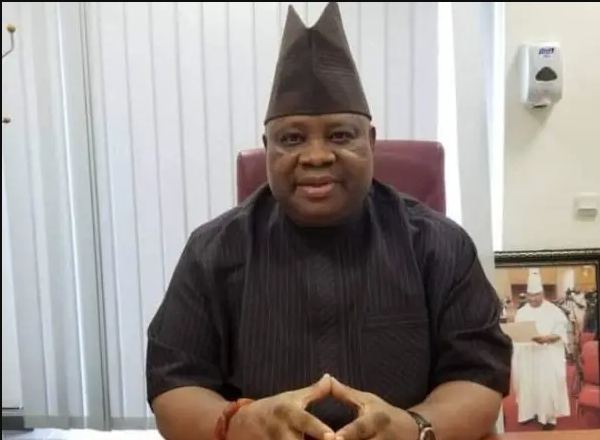 Osun State Governor, Ademola Adeleke, had a handful, yesterday, in his first 24 hours in office.

He dethroned three monarchs enthroned recently by his predecessor, Adegboyega Oyetola; suspended the chairman and members of the Osun State Independent Electoral Commission, OSIEC; and sacked via executive orders, no fewer than 12,000 workers recently employed by Oyetola.

The new governor also ran into a disagreement with the state legislators, on the legality of his executive orders over laws passed by the House, even as hoodlums unleashed mayhem in Osogbo, attacking motor parks, forcing Governor Adeleke to warn the citizenry against violence.

Few weeks to the end of his tenure, Oyetola appointed several monarchs, including the Akirun of Ikirun, Oba Yinusa Akadiri; Aree of Iree, Oba Ademola Oluponle; and Owa of Igbajo, Oba Adegboyega Famodun.

The former governor also approved the appointment of 30 permanent secretaries in various ministries.

However, Adeleke in a statement by his spokesman, Olawale Rasheed, about 24 hours after his inauguration announced that the thrones of Akirun of Akirun, Aree of Iree and Owa of Igbajo remain unoccupied, pending the outcome of a Committee of Inquiry to review their appointments and subsequent installations.

According to the statement, the six Executive Orders issued by the governor, which border on reversal of monarchs’ appointments, appointment and placement of civil servants, employment and freezing of government accounts had been signed and took immediate effect.

“All appointments of traditional rulers made by Osun State Government after 17th July, 2022, are hereby ordered to be reviewed to ensure there was strict compliance with due process of chieftaincy declarations and native law, custom and tradition relating to such chieftaincies. In the case of Ikirun, Iree and Igbajo, to avoid further breakdown of law and order, the appointments of Akirun of Ikirun, Aree of Ire and Owa of Igbajo are hereby put on hold pending review. “Subsequently, the palaces of Akinrun of Ikirun, Aree of Iree and Owa of Igbajo should remain unoccupied, while security agencies are hereby ordered to take charge.

“All employment in the service of Osun State Government made in any capacity into any capacity in all the ministries, departments, agencies, commissions, boards and parastatals after July 17th, 2022 are hereby nullified,” he said.

The governor, according to the statement, also ordered the reversal of appointments into civil service and directed heads of government agencies to embark on staff audits immediately.

“All Heads of Ministries, Departments, Agencies, Commissions, Boards and Parastatals of Osun State Government are hereby directed to carry out an immediate staff audit of the actual number of government workers in their various Ministries, Departments, Agencies, Commissions, Boards and Parastatals, as at 17th July, 2022, and should file a report to the Office of the Chief of Staff to the Governor stating the full details and position/designation of each of the staff on the forwarded list, within seven working days from the date of this Executive Order using the attached Oath of Fidelity Template.

“All appointments in the service of Osun State Government made in any capacity into any capacity in all the Ministries, Departments, Agencies, Commissions, Boards and Parastatals after 17th July, 2022 be and are hereby reversed”, the statement read.