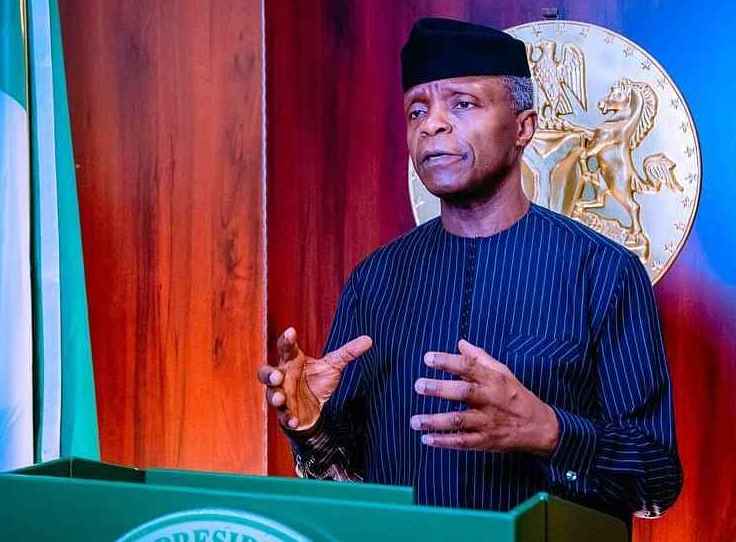 The vice president said that one of the things the Federal Government did with small business during the COVID-19 pandemic and  afterwards was the introduction of the MSMEs Survival Fund.

“The MSMEs Survival Fund gave almost a million businesses support after the pandemic.

“We paid three months salary of several of the MSMEs  especially private schools such as-private primary schools, private secondary schools; we paid for teachers and also for several other businesses.
“I think the statistics will be useful, especially as you further research and work; and so much have been done.
“But as I keep saying, it is a large country; a very big country;  in order to deal with all those issues and in order to support more businesses in a way that they ought to be supported, a lot more money is needed.
“And just one final point on that, the AfDB has agreed to support the government with 500 million dollars for MSMEs in technology in particular; so, we think this is something that will be very helpful in addition to the N75 billion, which the government has set aside for young people in small businesses.”
According to him, support for small businesses must continue as they are the future of the country.
He said that the support given to MSMEs had brought hope, jobs and opportunities.
Osinbajo commended also the Seventh Day Adventist Church for the investment it had made in education.
The vice president said that the church’s gesture was worthy of emulation for other religious organisations.
“The real of work of ministering is a work of ministering to the people, especially those who cannot afford to do many of those things themselves.
“The work that the ministries did was the reason the likes of Oduyoye and I are here.
“Because our college (Igbobi College) was one that was founded by two Christian missions–the Anglican and Methodist missions–and they gave quality education at a cheap rate so that we were able to afford it and several of us were able to go to school and be the people we are today.
“So, I believe that it is very important that religious organisations see this as primary in all of the tasks and all of the things they choose to do.
“So, I want to commend the church for this and again, to congratulate dear brother and friend, Oduyoye,” he said.
Earlier,  in his lecture, Oduyoye said that small businesses constituted a vibrant part of major economies of the world.
He said that MSMEs were responsible for employing more than 47 per cent of workers in private sector in 2019.
He recommended that government at all levels, especially the Federal Government, should go the extra mile to support small businesses.
Oduyoye said that insurance should be encouraged to mitigate the losses of small businesses.
In his opening remarks, Babcock University’s Vice Chancellor, Prof. Ademola Tayo, said the lecture was in keeping with the tradition of the university in which new professors introduced their research work to world. (NAN)
Tags: afdb MSMEs VP.Prof.Yemi Osibajo