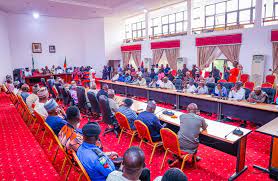 The Chairman of the All Progressive Congress (APC) Presidential Campaign Council and the Governor of Plateau State, Simon Lalong, set the tone for flagging off electioneering campaigns to hold in Jos, the Plateau State capital, by inaugurating a 40-man Local Organising Committee (LOC).

Responding on behalf of the Committee members, the Chairman and Deputy Speaker House of Representatives, Idris Wase, said they would hit the ground running to ensure that the members’ assignment was carried out effectively.

Wase said, “Plateau is the home of APC, and we will show this during the flag-off. We assure stakeholders that the LOC committee will not disappoint the Governor, the party, and the people of the State.” Other prominent members of the LOC are the gubernatorial candidate of the APC in Plateau state, Nentawe Yilwatda; also the Presidential Campaign Council Coordinator in Plateau State is to serve as Deputy Chairman of the LOC, Speaker of the Plateau State House of Assembly, Rt Hon. Yakubu Sanda and APC Chairman Hon. Rufus Bature.

The 40-man Committee also has three Elders from the three Senatorial Districts of the State, Local Government Chairmen, and a representative of the National Association of Nigerian Students, NANS, among others.