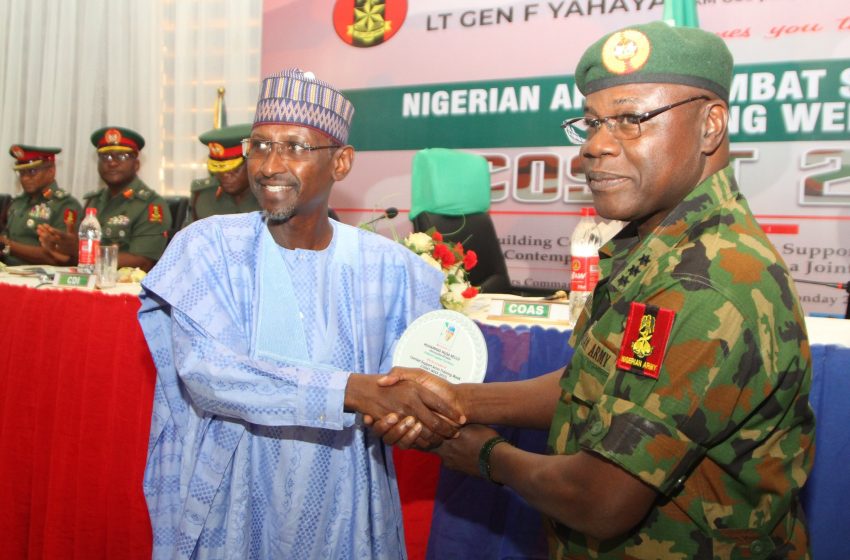 Nigeria’s Chief of Army Staff, Lieutenant General Faruk Yahaya says the Nigerian Army has intensified its collaboration with sister Services and other security agencies to restore normalcy and guarantee the safety of lives and property.

He stated this at the opening of the Combat Support Arms Training Week (COSAT) 2022 which began in Abuja Nigeria’s Capital on Monday, 20th June 2022.

He said the Nigerian Army which forms a key component of a comprehensive national security architecture, established to defeat current and emerging threats has continued to support the civil authorities maintain law and order by employing its capabilities which has lead to tremendous successes in its activities with the contributions of the Combat Support Arms.

General Yahaya said the Combat Support Arms have continued to employ their expertise and unique capabilities to compliment the operational endeavours of the Combat Arms.

“The impact of their inputs remain evident in the successes recorded in the counter-insurgency operations in the North East as well as anti-banditry operations in the North West and North Central parts of the country. It could be agreed that the Combat Arms would rarely achieve success in battle without adequate fire and engineer support as well as seamless communication and timely intelligence.

“It is also worthy to highlight that the Combat Support Arms Training Week has continued to provide the best avenue for participants as well as serving and retired senior military officers to brainstorm and re strategize towards providing effective support to contemporary security operations. It is therefore expected that the outcome of this Training Week would further ensure greater professionalism, readiness, administration and cooperation in consonance with the pillars of my command,“ General Yahaya stated.

Also speaking at the event, the Minister of the Federal Capital Territory, Mallam Muhammad Musa Bello commended and appreciated the Nigerian Army for their contributions collaboration with other security agencies, to keep the nation’s capital safe.

He commended the heads of the various army formations whom he said are members of the FCT Security Committee for their  commitment and insightful contributions to the FCT Administration.

The Chief of Military Intelligence Major General DI SALIHU said the COSAT Week is an annual NA event that provides the platform for personnel of the Combat Support Arms to constructively engage, share ideas and experiences aimed at enhancing effective support to the NA in tackling the current hydra-headed security challenges.

“These challenges require extraordinary measures entrenched in solid professional foundation to surmount. We are not unaware of the complexities and the dynamics of the challenges, thus, the need for abilities and capabilities that transcend the normal thresholds in the Combat Support Arms.

“Hence, the careful and meticulous choice of the theme for this year’s COSAT, “Building Competencies in Combat Support Arms to Enhance Contemporary NA Operations in a Joint Environment. This is to reflect the requirements for accomplishing the somewhat complex task ahead. It is also to adequately develop the necessary skill sets that would harness the Chief of Army Staff’s purposeful procurement and focused operational directives.“

He further stated that the COSAT Week 2022 would further afford the Combat Support Arms the avenue to appraise the various Corps’ operations and procedures with a view to making necessary adjustments in order to better support NA operations.