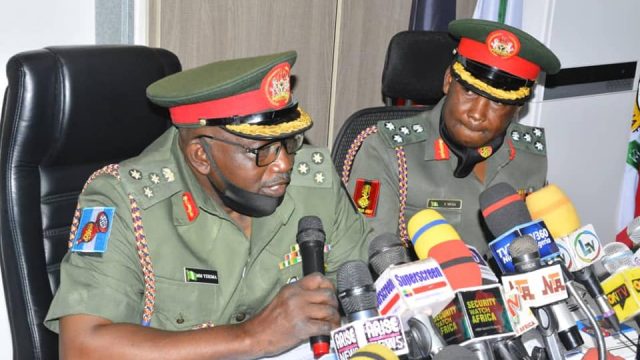 Army spokesman Mohammed Yerima in a statement said the article did not mention any specific location where the alleged distribution took place.

Yerima said said “The NA being a professional organisation decided to look at the article with every seriousness with a view to making intelligence out of it.

“However, our analysis established that there was nothing substantial about the claim except that it was a hurriedly packaged piece of propaganda that was meant to distract the populace away from the recent defeats being suffered by the terrorists.

According to him, “It is a notorious fact that the terrorists at various times have made several attempts to make the lives of the residents of these states miserable through the Ramadan season which was met with an overwhelming response from the troops of Operation Hadin Kai. The most recent of such being their failure to sneak into Maiduguri on 11 May 2021 same day this ill-conceived article was published.

“The article went on to give breakdown of the food items distributed including cash which the publisher alleged was meant to entice the locals to join the terrorists ranks. The article then switched to speak on the 2019 report of International Crisis Group which tended to pour encomiums on the terrorists recruitment system since breaking away from the Abubakar Shekau’s faction.

Yerima added that the author of the article displayed a clear lack of situational awareness by getting the designation of the various terrorist groups moduled up.

“In the self-styled amateurish publication, there was no single mention of any community that the said distribution took place which is indicative of the fact that there was indeed no community or village where such activity took place,” Yerima said.

“The writer consciously omitted such an important part knowing that once a name is attached to the publication it would be much easier to unravel the motive behind it, which is simply to mislead the unsuspecting readers.

He noted “Our team of eagle-eyed analysts went further to critically examine the pictures attached to this malicious publication and discovered that they were simply stage-managed in typical terrorists-styled propaganda. The uncoordinated director of the photoshoot presented the pictures according to his IQ and decided to measure the standard of the Nigerian public from his own personal standing.

“He used two poorly constructed shacks sited in the wilderness in multiple scenes by simply changing the arrangement of items and introducing different faces to make it look like an existing structure,” Yerima said.

“He later posted a truck loaded with bags and a few terrorists on it parked in the middle of nowhere. A closer look at the background of all the pictures clearly showed an empty forest with no signs of human habitation or activity except the few terrorists and some children that must have forcefully taken away from their parents. These facts therefore met every known style of the terrorists’ propaganda.

“The million-dollar question here is why the choice of Sahara Reporters as the medium to propagate such unfounded piece that failed every test of professional journalism? Could it be that the terrorists find the media outfit fertile enough for propagating their devilish stories? These are questions that demand answers from the publishers of this piece of disinformation.”