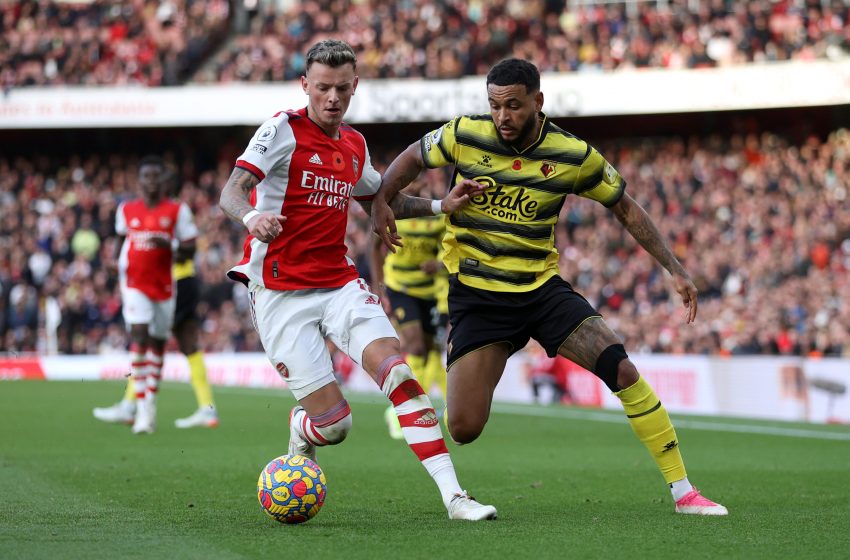 LONDON, ENGLAND – NOVEMBER 07: Ben White of Arsenal battles for possession with Joshua King of Watford FC during the Premier League match between Arsenal and Watford at Emirates Stadium on November 07, 2021 in London, England. (Photo by Richard Heathcote/Getty Images)

Martin Odegaard struck early for the visitors before Cucho Hernandez equalised with a stunning overhead kick minutes later but England star Saka restored Arsenal’s lead in an entertaining first half.

Brazilian winger Gabriel Martinelli made it 3-1 early in the second half and the Gunners held out for a crucial win despite a late goal from Moussa Sissoko.

The victory lifted Mikel Arteta’s men into fourth place in the Premier League — one point ahead of United, who were in action in the later kick-off against leaders Manchester City.

Arteta, whose team started the season with three straight league defeats, said it was “very pleasing” to be in the top four, although he felt the win should have been more comfortable.

“We know how difficult it is to be in this position in this league,” he told Sky Sports. “We’ve earned it — we have come a long way as a team.”

Arteta was asked about the role he played in the build-up to Arsenal’s third goal — he grabbed the ball when it went out of play and quickly passed it to Saka, who launched the ultimately decisive move with a throw-in.

Arsenal jokingly awarded their manager an assist on their Twitter feed.

“I saw an advantage and I took it,” said Arteta. “We have to be alive and that is the way I live the game. I try to instil that in the team as well.”

– Early scare -Watford had the ball in the net a few seconds after kick-off but Emmanuel Dennis’s effort was ruled out for offside.

Arsenal settled quickly after their early fright and were in front in the fifth minute after neat work down the right, with Saka cutting back to Odegaard, who finished with his left foot.

But the Gunners’ advantage was cancelled out in the 11th minute when Colombian forward Hernandez produced an acrobatic overhead kick from near the penalty spot after a cross from Kiko Femenia.

Arsenal restored their advantage just after the half-hour mark with a cleverly crafted goal finished by the lively Saka.

The England man dispossessed Tom Cleverley just outside the Watford box before passing to Alexandre Lacazette, who held the ball up then backheeled it to Saka, who fired in.

Arsenal extended their lead early in the second half with a delightful third from Martinelli, who hammered home from the edge of the box after a neat layoff from Lacazette.

Watford still offered a threat despite Arsenal’s superiority and Dennis should have narrowed the gap but miscued a chance at the far post with about 20 minutes to go.

Arsenal substitute Eddie Nketiah hit the woodwork with 10 minutes left before Sissoko gave the visitors a late scare when he bundled the ball home in the 87th minute.

The win makes Arsenal strong favourites to finish in the top four and qualify for next season’s Champions League — a competition they have not played in since the 2016/17 season.

They have 48 points after 25 games, one ahead of United, who had played two games more ahead of the Manchester derby.