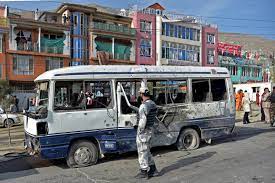 At least 11 people have been killed and dozens injured after a roadside bomb struck a bus in Afghanistan’s southern Zabul province, the interior ministry said.

He added that 25 people were injured including women and children who were in critical condition.

Violence in the country has been rising sharply in recent weeks after the United States announced it would withdraw its troops from the country by September 11.

The Taliban announced late on Sunday that it would declare a three-day ceasefire for the Eid al-Fitr holiday later this week.