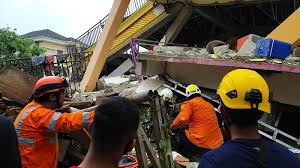 Rescuers were searching for people trapped in the rubble. More than 600 people were reported to have been injured in the quake, which struck inland between the coastal cities of Mamuju and Majene. No tsunami warning was issued.

“I’m afraid to say how many fatalities,” said Ardiansyah, an emergency response official for West Sulawesi Province, who like many Indonesians uses one name. “We are still evacuating and erecting shelters. Many people are buried under the ruins.”

Darno Majid, head of the West Sulawesi Province disaster mitigation agency, reported Friday afternoon that at least 35 people had died in the quake. Local disaster officials said that most of the fatalities occurred in Mamuju, the larger of the two coastal cities.

The earthquake capped a week of disasters for Indonesia. On Saturday, a Sriwijaya Air jet crashed into the Java Sea with 62 people aboard. And on Sunday, at least 24 people were killed in landslides on Java island.

The area hit by the quake was about 160 miles southwest of the city of Palu, where a devastating earthquake and tsunami struck in 2018, liquefying part of the city and killing thousand