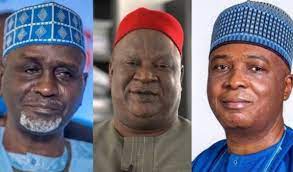 The presidential candidate of the Peoples Democratic Party, Atiku Abubakar, has named former Presidents of the Senate, Bukola Saraki and Anyim Pius, as well as a former Kano State Governor, Ibrahim Shekarau, as special advisers to his campaign council.

Saraki is to serve as special envoy to the presidential candidate and Anyim as a special adviser.