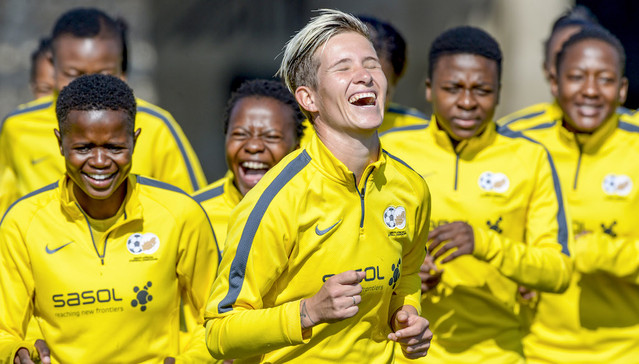 Things are not looking smooth for the Banyana Banyana of South Africa ahead of their semifinal clash with the Super Falcons of Nigeria at the on-going 10th African Women’s Nations Cup in Cameroun.
Today’s encounter at the hilltop Omisport Stadium in Limbe will commence at 7.00 p.m. The Guardian learnt that the Banyana Banyana have been forced to release two players from camp for different reasons, while one of their regular players is suspended from today’s match due to card offences.
Defender Nomathemba Ntsibande is said to be bereaved, and has been allowed to return home. Holland-based goalkeeper, Roxanne Barker, has been deregistered from the tournament after sustaining a toe injury on her right foot at training. She is expected to be out for three weeks after scans confirmed the fracture.

The exclusion of the three players from the squad is seen as a big blow to them. At their Parliamentarian Flat Hotel, other members of the South African team were seen discussing in low tones over their colleagues’ departure.
While some expressed their condolences to the Ntsibande family, others wished Barker a speedy recovery. Banyana Banyana qualified for the semifinal following their magnificent 5-0 victory over Egypt on Friday, which saw them finish second behind the host nation, Cameroun. They are in the same hotel with the Super Falcons of Nigeria in Buea, about an hour drive to the Omisport Stadium in Limbe