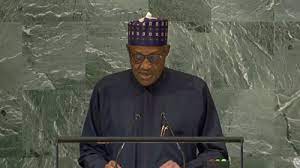 President Muhammadu Buhari says free, fair and credible elections are the foundation of political stability and peace in any nation, assuring that he will leave a legacy of free and fair elections.

The President made this known in his last address before world leaders at the 77th session of the United Nations General Assembly in New York, the United States.

“Indeed, we now are preparing for general elections in Nigeria next February. At the 78th UNGA, there will be a new face at this podium speaking for Nigeria.

“Ours is a vast country strengthened by its diversity and its common values of hard work, enduring faith and a sense of community. We have invested heavily to strengthen our framework for free and fair elections. I thank our partners for all the support that they have provided for our elections.

“As President, I have set the goal that one of the enduring legacies I will like to leave is to entrench a process of free, fair and transparent credible elections through which Nigerians elect their choice,” he said.

The President also called for debt cancellation for developing countries, noting that it poses “severe challenges” to the affected nations.

“Indeed, the multifaceted challenges facing most developing countries have placed a debilitating chokehold on their fiscal space,” he said.

“This equally calls for the need to address the burden of unsustainable external debt by a global commitment to the expansion and extension of the Debt Service Suspension Initiative to countries facing fiscal and liquidity challenges as well as outright cancellation for countries facing the most severe challenges.”

The President, who reiterated his commitment to constitutional limit, said Nigeria has stood for democracy and the rule of law as a country and in the sub-region in countries such as The Gambia, Guinea Bissau, and the Republic of Chad.

He added, “As I approach the end of my second and final four-year term, I am reminded of how much has changed in Nigeria, in Africa, and in the world, and yet, how some challenges remain.

“We are now more severely tested by these enduring and new global challenges, paramount among which are conflicts increasingly being driven by non-state actors, proliferation of Small Arms and Light Weapons, terrorism, violent extremism, malignant use of technology, climate change, irregular migration, and disparities in opportunities for improved standards of living.

“Despite the challenging international environment, the United Nations has proved that it can be strong when the will of its members is harnessed for positive collective action. The guiding principle of this extraordinary institution is the promotion of peace and security, development and human rights.”