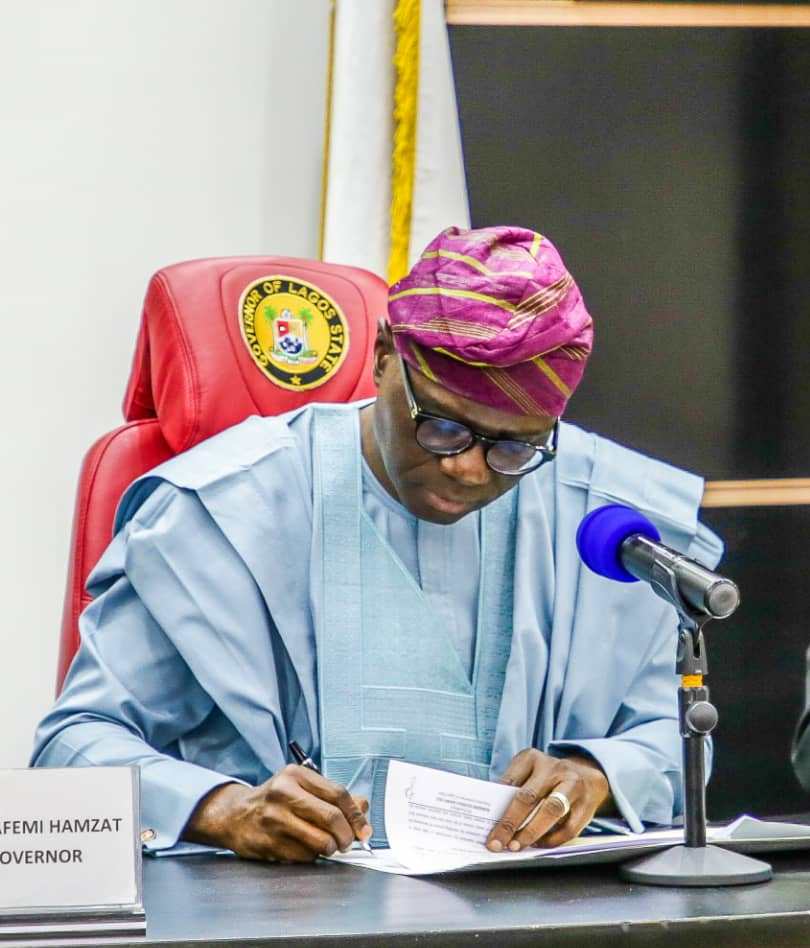 …As Sanwo-Olu signs Executive Order for Rebuild Lagos Trust Fund  Days of reflection over the carnage sparked by the hijack of the #EndSARS protests seem to have ended in Lagos, with Governor Babajide Sanwo-Olu leading the battle to rebuild razed infrastructure.

The Governor today (Wednesday) signed an Executive Order for the formation of an eight-man Board to coordinate efforts to restore lost assets. Citibank Nigeria Chairman, Mr. Yemi Cardoso will head the Board of the Lagos Rebuild Trust Fund. The Board members were unveiled at a Press Conference at the Governor’s Office, Alausa, Ikeja. Sanwo-Olu said the Government decided to put the criminal destruction behind it and face the huge and necessary task of rebuilding the State. The government, he said, would be embracing new standards of governance and building stronger partnerships, which would enable the State to bequeath stronger institutions and cohesion among residents.

He spoke of how many friends and admirers of the State have been calling to lend a hand in the rebuilding of the razed assets. He said: “In the last few weeks, we have been inundated with local and global offers of assistance to rebuild our State and recover all we lost to arson and violence in October. It is obvious that we can no longer wait to begin the onerous task of reconstructing Lagos. In the next few days, our Government will be sending a bill to the House of Assembly for the establishment of a Trust Fund to Rebuild Lagos.

“Today, I am signing an Executive Order to set up an eight-man Lagos Rebuild Trust Fund Committee, which will begin to oversee our recovery process. To ensure the highest standards of probity, transparency and accountability, FBN Trustees headed by Mr. Kunle Awojobi will oversee the Lagos Rebuild Trust Fund Committee. The Committee will comprise five members from the private sector, two members from the public sector and one member from the International Donor Aid Community. “We will embrace new standards of governance and build stronger partnerships, stronger people, stronger institutions, and stronger Lagos. Our strength lies in our uncanny ability to overcome the most complicated challenges because we have people who genuinely love Lagos State and will assiduously do all they can to preserve its peace and unity.” Sanwo-Olu said the Trust Fund would be responsible for getting detailed cost of restructuring and rebuilding of destroyed assets.

The Funds, he added, will also advise the State Government on the most critical assets to prioritise and identify emergency response service critically needed. The rebuilding plan, the Governor said, will be all-inclusive, stressing that the government would welcome support and contributions from well-meaning individuals and corporate organisations who believe in the Lagos Dream. His words: “I believe this is the starting point of a new socio-economic process. I am hopeful that this initiative will help us to seamlessly make the transition to a rebuilt Lagos with upgraded public structures, facilities and amenities. I know that the ashes that presently dot our landscape will birth modern and globally acceptable infrastructure.

“At the centre of this decisive action to rebuild Lagos is the need to closely work with the people and organisations who call Lagos home; those who believe in the Lagos Dream, and those who share our collective vision of a mega-city that thrives on peace and unity among all ethnic groups. Those who know that the future of Lagos is tied to our ability to keep nurturing our State and those who are ready to commit their resources to the glory of our State, because their future is the future of Lagos.” Other members of the Trust Fund’s Board are the Managing Partner, Olaniwun Ajayi LP, Prof. Konyinsola Ajayi, SAN; Chief Executive Officer of Sterling Bank, Mr. Abubakar Suleiman; Co-Founder and CEO, Flutterwave; Mr. Gbenga Agboola; Vice Chairman, Standard Chartered Bank, Mrs. Bola Adesola – all representing the private sector – and a representative of an International Donor Agency.

The Commissioner for Economic Planning and Budget, Mr. Sam Egube, and Permanent Secretary, Ministry of Works and Infrastructure, Engr. Jimi Hotonou, are members of the Board representing the public sector. As part of the government’s objectives to fully heal the wounds of the crisis, the Governor also announced six other Committees. They are: Business Continuity Committee; Assessment Committee; Execution, Measurement and Evaluation Committee; Communication and Engagement Committee; Trust Fund Implementation Committee; and Security and Enforcement Committee. With the move, Sanwo-Olu expressed optimism that the State would attain new heights of development for a more resilient system and become more united in achieving its development goals.