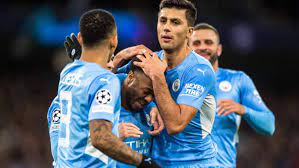 Manchester City got back on track as they thrashed Club Brugge 4-1 on Wednesday to move within touching distance of a place in the Champions League last 16.

Pep Guardiola’s side recovered from the shock of conceding a John Stones own goal after Phil Foden’s early opener at the Etihad Stadium.

Riyad Mahrez put City back in front in the second half and Raheem Sterling came off the bench to end his goal drought before Gabriel Jesus capped the rout.

City sit top of Group A, one point above Paris Saint Germain, after their third win in four matches in the competition.

Last season’s Champions League runners-up are five points clear of third-placed Brugge and will reach the knockout stages with one point from their last two games against PSG and Leipzig.

Returning to winning ways was the ideal preparation for Saturday’s derby against Manchester United at Old Trafford.

After a strong start to the season, City had suffered their worst period of the campaign.

Saturday’s shock home defeat against Crystal Palace came hot on the heels of a penalty shoot-out loss at West Ham that ended their four-year reign as League Cup holders.

Guardiola responded to those setbacks by defiantly claiming City were playing at an “incredible” level, labelling their current form among the “best moments” of his time at the club.

Having thrashed Brugge 5-1 in Belgium last month, City once again picked on Philippe Clement’s team, although the victory wasn’t without a few scares.

Guardiola had described Brugge’s visit as “much more important” than the Manchester derby and his players got the message.

– Constant menace -Kevin De Bruyne’s inconsistent form of late has been a concern, so it was intriguing to see Guardiola drop the Belgian midfielder.

Even without De Bruyne, City had too much attacking quality for Brugge.

Joao Cancelo was a constant menace and the left-back was inches away from scoring with a curling effort that cannoned off the post.