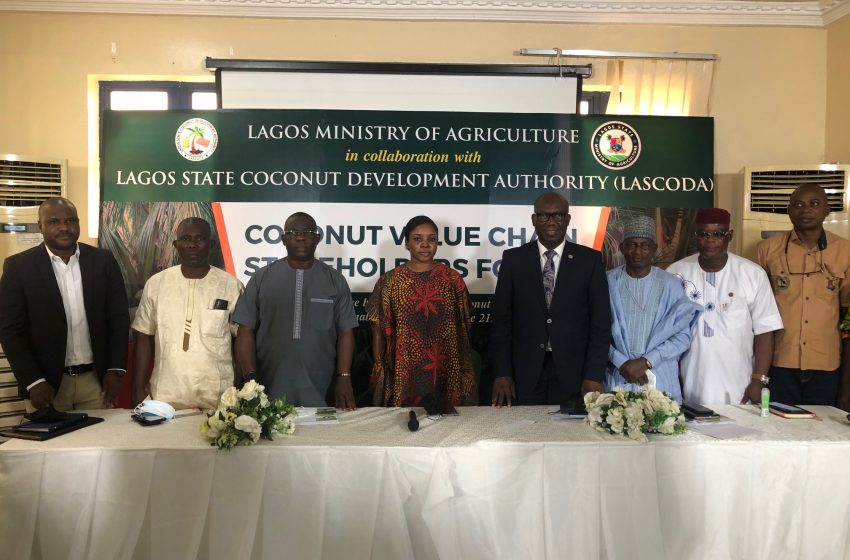 Stakeholders in the Coconut value chain in Lagos State have called on the Nigeria Institute for Oil-Palm Research (NIFOR) and other research institutes to conduct continuous research and development on improved varieties of coconut with lesser gestation period.

They made the resolutions on Tuesday at the end of one-day Coconut Value Chain Stakeholders Forum organised by the Lagos State Coconut Development Authority and held at the Lagos Chamber of Commerce and Industry (LCCI) Conference and Exhibition Centre in Lagos.

The forum was organised by the Lagos Ministry Agriculture in collaboration with Lagos State Coconut Development Authority (LASCODA).

The theme of the forum is tagged: “Addressing the Bottlenecks in the Coconut Value Chain to ensure Sustainable Development in a 21st Century Economy”.

The stakeholders discussed several issues relating to unleashing the potentials of the coconut value chain, which include low production, old plantation,

The Lagos State Commissioner for Agriculture, Ms Abisola Olusanya presented the 19-point resolution at the end of the forum.

Other resolutions include the need to encourage intercropping with other arable crops such as pineapple, cotton, maize, soya beans to ensure quick returns and the need to rebrand Coconut in order to attract youths to the Value Chain.

“Provide an enabling environment for Public Private Partnership with the private sector and other individuals; Encourage planting of Coconut tree in our homes and environment and Establishment of tissue culture lab for growing viable planting materials.

“Collaboration between NIFOR and LASCODA in providing planting materials; trade issues and land issues can be facilitated by the Federal Min of Industry, Trade and Investment and partners and Increase sensitization on the health, economic and environmental benefits of coconut.”

The stakeholders also called for a strong partnership with the Nigeria Agribusiness and Agro-Industry Development Initiative for the development of the Value Chain; increased daily consumption of Coconut and the setting up of a committee for the replacement of old Coconut palms.

The stakeholders also called for a closed-door meeting with the Customs and security agencies to proffer a sustainable solution to the challenges of border transportation.

“To also conduct a baseline study of the entire value chain to understand the operations within the Coconut Industry to ensure ease of doing business; Synergy among MDAs in the Coconut Value Chain Development.

“Rehabilitation of the Coastal line through partnership with the private sector and establishment of a standard operating procedure on the importation of Coconut,” the Communiqué reads.

Earlier, the Permanent Secretary, Lagos State Ministry of Agriculture, Mr. Hakeem Adeniji said the state government was ready to encourage commercialization of coconut for both local and export markets.

He reiterated the commitment of the State Government to support Coconut farmers, processors, marketers, haulage operators, producers among others on food security, job and wealth creation and tourism.

“Coconut grows naturally along the coastal terrain and cultivated in about 92 countries of the world including India, Indonesia, Philippines, Sri-Lanka and Nigeria.

“Seventy per cent of the total production from Nigeria is produced in Lagos State and ranks Nigeria 19th in the World Coconut producing Countries.

“In addition, close to 80 per cent of the coconut value chain activities, especially in the area of supply of improved seedlings to Commercial Coconut Growers in other 26 Coconut producing States of Nigeria is currently being driven from and by Lagos State.

“The state is naturally blessed with a vast Coconut Belt embedded with abundance of Coconut resources and it has comparative advantages over other crops in the country at large.

“It has about 3Million trees with annual production of 200 Million husked nuts while about 20,000 small scale farming families derive their livelihood from it and the number increases daily,” he said.

Specifically, Lagos State Government has been involved in the rehabilitation of the Coconut belt and production of improved Coconut seedlings.