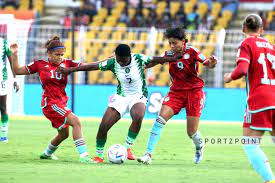 Nigeria’s U-17 women’s national team Flamingos on Wednesday lost 6-5 on penalties to Colombia, after full-time ended goalless, in the semi-finals of the U-17 Women’s World Cup in Goa, India.

Comfort Folorunsho lost her sudden death penalty to hand Colombia the winner in a match the Flamingos could hardly string three passes together.

The Flamingos had beaten favourites USA in the quarter-finals and were the favourites for the clash, but they were a shadow of themselves in this last four match-up against the South Americans, as they sat back for the most part of the game, preferring to defend deeply for much of the 90 minutes.

It’s the farthest Nigeria have gone at the cadet championship since the tournament’s inception in 2008.

After losing to Nigeria on two different occasions at the tournament – 2012 and 2014 – Colombia avoided a third defeat this time around against their flat-footed opponents.

Both teams had battled to a grim scoreless draw in Goa and Flamingos coach, Bankole Olowookere, seeing the prospect of penalty kicks introduced second-choice goalkeeper, Chilamso Jiwuaku, who replaced Faith Omilana in the 90th minute.

Omilana kept Nigeria in the tie with five big saves, with the Flamingos’ forward-line failing to create many chances.

Colombia defender Mary Espitaleta rocked the crossbar from 23 yards in the 29th minute as the South Americans poured forward, and Omilana produced a crucial block to deny captain Linda Caicedo with seven minutes left in the first period.

Omilana again foiled Caicedo in the second period, and penalties had to be applied to separate two teams looking for a spot in Sunday’s final match.

Nigeria was a kick away from victory after Yesica Munoz saw her kick saved by Jiwuaku, whilst Gabriela Rodriguez, Stefania Perlaza, Espitaleta and Caicedo all scored for Colombia.

Immaculata Offiong, Etim Edidiong, Miracle Usani and Taiwo Afolabi scored for Nigeria, but defender Omamuzo Edafe, who had scored Nigeria’s winner against USA in the quarter-finals, struck her kick against the upright to take the shootout into sudden death.

The South Americans will now battle winners of the tie between Germany and champion Spain in the final on Sunday, while the Flamingos play the losers of the tie in the third-place play-off.