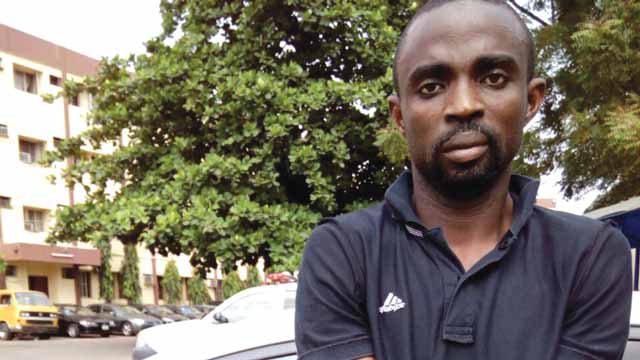 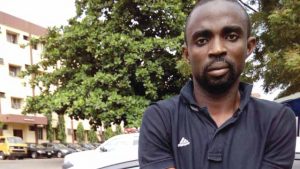 A thirty-five-year-old man, Michael Atanda, who has been threatening to expose nude pictures of four ladies on the social media, if they failed to pay money into his account, has been arrested by operatives of the Rapid Response Squad (RRS) of the Lagos State Police Command.
Atanda, a National Diploma holder in Computer Science, who works at a popular computer school based in Ikeja, was arrested on Thursday by the surveillance team of the squad after five days of baiting and monitoring.
The suspect, an ex-convict and father of three, had collected N121,000 from his four girlfriends through blackmail, but had wanted the ladies to pay more or risk leaking their nude pictures on social media.

The suspect, who is known as Segun Bayo on Facebook and a graduate of Obafemi Awolowo University Ile – Ife, said he went about adding several ladies on Facebook.
“The profile picture on my Facebook account is that of a guy based in London, and so as part of my introductions to ladies, I tell them I am a construction engineer and that I am living with my parents in Europe.”
He added: “ After sometime, I would lure them into sexual conversations during which, I persuade them to send their nude pictures to me. They would send and I would send mine to them too”.
Before that, I would pretend that I was seeking a serious relationship with them, and that very soon, I would be coming to Abuja on a business trip, during which I would see them”, he stated. The suspect continued “I would pretend to be serious by calling them with the aid of computer software that transforms my Nigerian line into an international one. Meanwhile, I would warn them that I was calling through a public phone booth “
“As soon as they send their nude pictures, I would come up with all manner of stories. And I would begin to extort and blackmail them. Through this means, I have collected over N121,000 from my latest victims.
“I was jailed last year in a similar circumstance after fraudulently collecting N700,000 from a lady I met through a dating site. I was eventually bailed but the case is still pending in court,” he confessed.“I have collected only 10,000 from Funmilola; N6,000 from Motunrayo; N5,000 from Joy; and N100,000 from Lizzy.”
A source within the RRS disclosed that apart from Lizzy, who reported the incident but declined to press charges, three other suspects, who were discovered during investigations, acknowledged on phone calls they had been paying the suspect so that he would not leak their nude photographs online.
The source added that even though investigators had reached out to more victims after checking the suspect’s Facebook conversations with a number of ladies, all of them have refused to come forward, after his bank statement confirmed the suspect received more payments from his victims.
Confirming the development, the Lagos State command’s Police Public Relations Officer, Dolapo Badmos, said the police were carrying out a thorough investigation on the case to aid prosecution.The suspect has been transferred to SCID for further investigations.