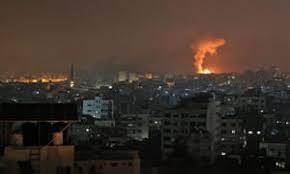 The much-trumpeted Abraham Accords – that saw the UAE, Bahrain, Morocco and Sudan all sign agreements with Israel – were always going to be hostage to events on the ground. Now those events have descended into deadly violence, any further public warming of relations between the Arab states and Israel has been put on hold.

The Abraham Accords, concluded with such fanfare in the final months of the Trump administration, saw several Arab countries not only formalise their relations with Israel but also embark on unprecedented cooperation with it, across a wide range of sectors including security and intelligence. Within weeks of the signings in Washington, the head of Israel’s external intelligence agency, Mossad, was given a VIP welcome in the Gulf – something unthinkable even a year ago.

Yet today governments of the signatory nations, notably the UAE and Bahrain, find themselves in a deeply uncomfortable position. Having told their populations of the coming benefits of teaming up with Israel in the fields of trade, tourism, medical research, green economics and scientific development, they now find themselves metaphorically squirming as 24-hour TV footage shows Israel’s bombardment of Gaza, the threatened eviction of Palestinians from their East Jerusalem homes and the recent storming by police of that city’s sacred Al-Aqsa Mosque compound.