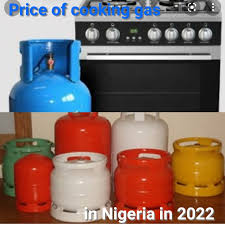 A report by the National Bureau of Statistics (NBS) shows that the average price of liquefied petroleum gas (LPG), otherwise known as cooking gas, has soared by 83.62 per cent in the last year.

According to the NBS, the highest average price increase was recorded in Ekiti State, where a five kilogramme cylinder of LPG goes for N4,200.

The ICIR had reported that the rising cost of gas was negatively affecting families and food vendors, who expressed difficulty in coping with the soaring prices.

Due to the constant rise in the price of cooking gas, many people are shifting to coal, sawdust and other dirty fuels, which negatively affect human health.

These options also contribute to global warming, as solid fuel burning releases large amounts of greenhouse gas into the atmosphere.

This is despite the launching of the Decade of Gas in Nigeria Initiative by Nigeria’s President Muhammadu Buhari in 2021 to ensure the country’s transition to cleaner energy.

The soaring price of cooking gas is attributed to several reasons, including the devaluation of the naira, as a large quantity of the product in Nigeria is imported, despite the country being a gas-endowed state.

In 2021, the Marketing Manager of the Nigerian Liquid Natural Gas (NLNG) Austin Ogbogbo, had blamed the increase on inability of domestic marketers to procure a large per cent of gas supplied.

There has also been a global gas crisis caused by shortage in supply of natural gas.

According to the International Monetary Fund (IMF), prices of commodities, including gas prices, are likely to remain high due to Russia’s invasion of Ukraine.

The IMF disclosed this in a report released in April, titled ‘World Economic Outlook: War Sets Back the Global Recovery April 2022.’