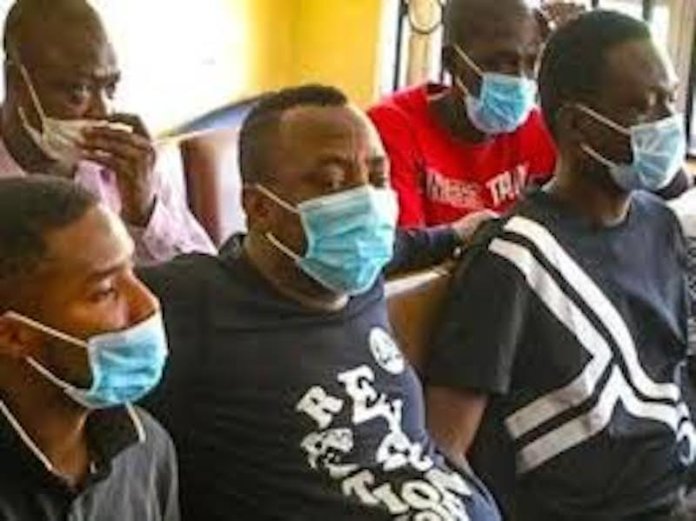 A Chief Magistrate Court in Abuja has fixed January 8, for ruling on the bail application filed on behalf of Omoyele Sowore and four others.

Chief Magistrate Mabel Segun-Bello fixed the date yesterday after listening to the application for bail moved by the lawyer to the defendants, Marshal Abubakar and the opposition by the prosecutor.

The court also ordered the defendants to be remanded at the Force CIID facility in Area 10, following complaints by Sowore that they were denied food and medical attention at the Kuje Correctional Centre.

Chief Magistrate Segun-Bello further ordered the police to provide the third defendant, Damilare Adenola, who is a law student of the University of Abuja, with internet facilities and writing materials to enable him join his classmates who resumed online classes on January 5.

Sowore and the four others were arraigned on January 4, on three counts of criminal conspiracy, unlawful assembly, and inciting public disturbance but they all pleaded not guilty to the charges.

They were arrested by the police on New Year’s Eve during a candlelight procession organised by Sowore against bad governance.

Meanwhile, a civil society organisation, Socio-Economic Rights and Accountability Project (SERAP), has asked the United Nations Working Group on Arbitrary Detention to prevail on the federal government to withdraw charges brought against a journalist, Omoyele Sowore and four other activists.

The group in a petition dated January 4, 2021, and signed by SERAP Deputy Director Kolawole Oluwadare, the organisation said that Sowore and four other activists were arrested by the government for peacefully exercising their human rights.

The complaint was addressed to the Chairman/Rapporteur of the Working Group, Mr. José Guevara Bermúdez.

SERAP said: “the detention of Omoyele Sowore and four other activists constitutes an arbitrary deprivation of their liberty because it does not have any legal justification. The detention also does not meet minimum international standards of due process.”

SERAP said: “The Working Group should request the Nigerian authorities to withdraw the bogus charges against Sowore and four other activists, and to immediately and unconditionally release them.”

The organisation urged the Working Group to “initiate a procedure involving the investigation of the detention, torture and bogus charges against Sowore and four other activists, and “to urgently send an allegation letter to the Nigerian government inquiring about the case generally, and specifically about the legal basis for their arrest, detention, torture and other ill-treatment, each of which is in violation of international human rights law.”

SERAP is also urging the Working Group to “issue an opinion declaring that the deprivation of liberty and detention of Mr Sowore and four other activists is arbitrary and in violation of Nigeria’s Constitution and obligations under international human rights law. We also urge the Working Group to call for their immediate and unconditional release.”