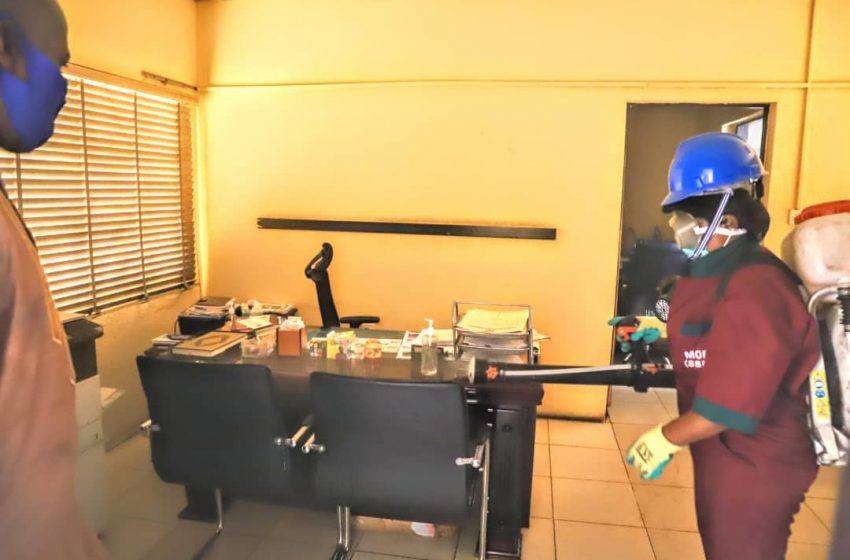 In its determination to curtail the spread of the second wave of the COVID-19, the Lagos State Government, on Saturday, commenced the full decontamination/fumigation of offices in the State Secretariat Complex and other Government offices.

A statement signed by the Permanent Secretary, Office of Environmental Services, Ministry of the Environment and Water Resources,  Mrs. Belinda Odeneye, stated that the exercise had become necessary to reduce the risk of the spread of COVID-19 in the State secretariat.

She emphasised that the State Government will continue to adopt measures as part of the safety protocols to ensure that the pandemic does not further spread in the State, saying that the fumigation exercise will be a continuous process until the virus is contained.

Odeneye said the decontamination exercise which commenced on Friday, 15th of January, 2021 with the Ministry of the Environment and Water Resources, Lands Bureau, and Ministry of Physical Planning and Urban Development is expected to end on Saturday the 30th of January 2021.

The PS added that the exercise would commence at 2 p.m during weekdays, while it would start at 8 a.m on weekends and urged all workers to vacate their offices and complex on stipulated days to avoid inhaling chemicals used during the fumigation exercise.

The State Treasury Office, Ministry of Finance, ABAT CENTRE, SPDV, Ministry of Science & Technology and the Ministry of Youth and Social Development are to be fumigated on Friday 22nd of January 2021, while Ministry of Women Affairs & Poverty Alleviation, Lagos State Safety Commission, Ministry of Economic Planning & Budget, Lagos State Water Regulatory Commission and the Lagos Television LTV Complex, Agidingbi, are to be decontaminated on 23rd of January. Also, the State  House of Assembly Complex, LASEPA Building, LASEMA, Fire Service Office – Alausa, Digital Village and RRS & GMT will be fumigated on Sunday 24th January.

It would be the turn of the Lagos House/Office of the Governor, Office of Chief of Staff and Lagos Global on Tuesday 26th January, 2021. The exercise will continue on 27th January at Lagos State Parks and Gardens Agency (LASPARK), Lagos State Signage and Advertising Agency (LASAA), JJT and Ndubuisi Kanu Parks, Staff Canteen and Adeyemi-Bero Auditorium.