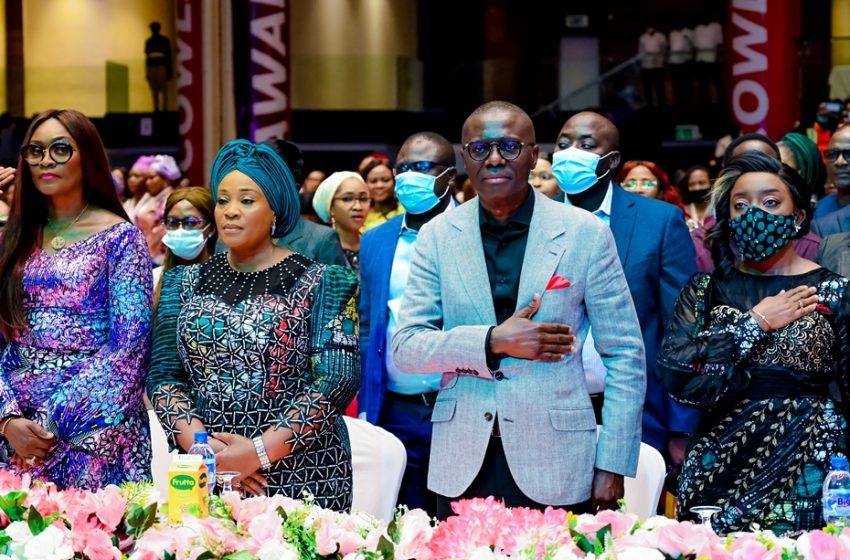 …As Lucky Participants Win Three-Bedroom Apartment, Car, Return Ticket to London, Many Others

Lagos State First Lady, Dr. Ibijoke Sanwo-Olu, has called on women across the country to embrace a growth mindset and inspire other women to emerge as policy-makers, just as she advocated the adoption of a special system whereby more women are empowered to assume leadership positions in the judiciary, legislative and executive arms of government.

Mrs. Sanwo-Olu stated this in her address at the Gala Night of the ongoing 21st Annual National Women’s Conference of the Committee of Wives of Lagos State Officials (COWLSO), held at the Convention Centre, Eko Hotels and Suites, Victoria Island, Lagos.

Describing women as bankable, dependable and formidable, the First Lady urged participants to develop their potentials and see how to support other women and girls with the knowledge gained so far at the conference.

“We have realised that the sky is no longer the limit; every woman here is an ambassador in her home, in her community and so from everything that we have learned, we will not only learn and keep but we have to use it positively to influence the society”, she said.

Sanwo-Olu, who is also the Chairman of COWLSO, said the theme of the conference ‘AWAKE’, was specially chosen to ensure that women are conscious and alive to their responsibilities.

While maintaining that as women, conscious efforts must be made to mentor the younger generation and go further to support and sponsor their ideas, the First Lady commended the Governor Babajide Sanwo-Olu for his support for the female gender in the State, just as she called on all men and boys to equally embrace the ideals of women.

At the event, several mouth-watering prizes were won by some of the physical and virtual participants, including a N25 million three-bedroom apartment at Sangotedo, Lekki, won by a civil servant attached to the Lagos State Christian Pilgrims Welfare Board, Mrs. Olasunbo Bankole;  a  brand new GAC GS3 SUV won by a shop owner in Surulere, Mrs. Adetoro Ojora-Akintola; and a return ticket to London won by the Director of Administration and Human Resources, Lagos State Agricultural Development Authority, Mrs. Mary-Ann Adetoro Amodu.

The return ticket was won by Mrs. Amodu on her wedding anniversary, a development that made Governor Babjide Sanwo-Olu, who was in attendance at the event, announce another return ticket to London for her husband so that the couple can travel together to celebrate their anniversary.