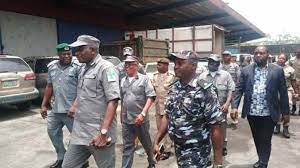 The Public Relations Officer, Jerry Attah, in a statement quoted the Customs Area Controller, Zone C, Compt. Yusuf Lawal as saying that N1.28 billion was generated from seizures from contrabands while N7.6 million was raised as DN for cargoes that exited the seaports.

According to him, the contrabands seized were bags of smuggled foreign parboiled rice, unregistered pharmaceutical drugs, foreign soaps, and tomato paste.

He said: “The detained and seized items include: 2,976 bags of 50kg each of foreign parboiled rice, 1,024 cartons of Colcaps medicament without NAFDAC certification, 290 cartons of foreign Eva soap, 204 Cartons of foreign tomatoes paste, 130 Jumbo bales of used clothing.

“Others are 5,200 live ammunition cartridges, 6 exotic vehicles, one Toyota land cruiser bulletproof 2019 model without an end-user certificate from NSA, a Toyota Hilux 2020 model, a Toyota Corolla 2018 model among others.

“This feat wouldn’t have been possible without the logistics support from the Comptroller-General of Customs, Col Hameed Ibrahim Ali (rtd) and the entire Management of the NCS,” he said.