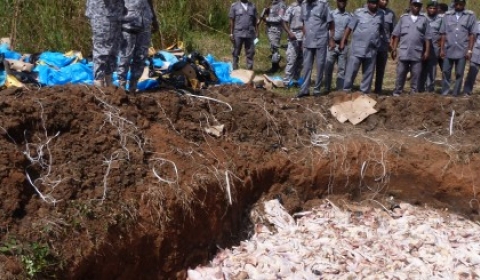 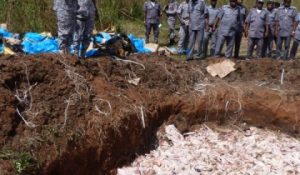 The Nigeria Customs Service (NCS), Federal Operation Unit Zone `C’, Owerri, has destroyed 11, 315 cartons of imported poultry products valued at N90.52 million in Benin.
The Officer-in-Charge of the Benin Axis of NCS, Federal Operation Unit, Zone C, Mr Dahiru Usman-Shehu, made this known in a statement in Benin on Wednesday.
He said that the 11,315 cartons of imported poultry products (chicken and turkey) had a duty of N18.1 million and duty paid value of N108. 62million.
He said that the products were seized on Monday along the Benin-Ekiadolor axis by Lagos Expressway at 10:14 p.m.
According to him, the poultry products were conveyed in a DAF truck with registration number LND 641 XM.
“The items were destroyed at the Customs House Destruction site on Tuesday in compliance with the Federal Government policies on importation of frozen products,’’ he said.