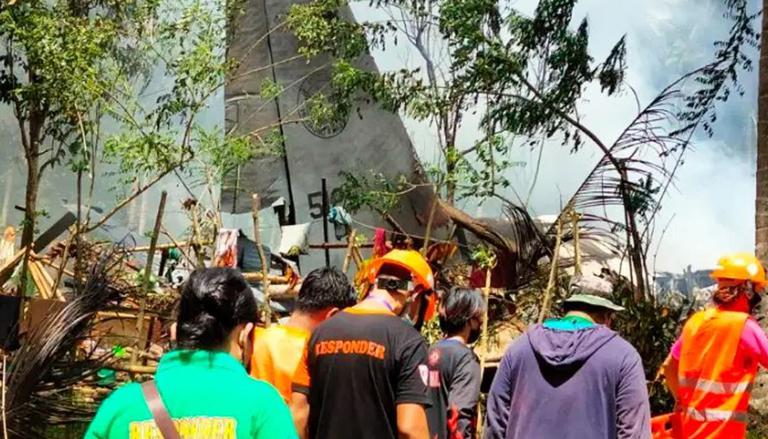 All 96 passengers on the Philippine air force plane that crashed on Sunday have been accounted for, military chief Cirilito Sobejana has said. The passenger death toll from the crash was 47, while 49 military personnel were injured, Sobejana told Reuters in a phone message.

The Department of National Defence said on Sunday that three civilians on the ground were also killed, and that four civilians were injured when the Philippine military aircraft carrying troops crashed and burst into flames after missing the runway in the south of the country.

Most of the passengers onboard the C-130 Hercules transport aircraft when the accident happened were recent army graduates. The plane crashed as it tried to land on Jolo island in Sulu province at about midday on Sunday. Some jumped from the fuselage as it crashed.

Photos taken by the local media outlet Pondohan TV and posted on Facebook showed the wrecked body of the plane engulfed in flames. A plume of thick black smoke rose above houses near the crash site.

Sobejana said the aircraft had been carrying troops from Cagayan de Oro on the southern island of Mindanao when it missed the runway as it tried to land on Jolo.

The plane tried to “regain power but didn’t make it”, he told local media, describing the accident as “very unfortunate”. “Responders are at the site now. We are praying we can save more lives,” Sobejana told AFP.

Sobejana said the people rescued from the wreckage were being treated at the nearby 11th infantry division hospital.

The air force spokesman Lt Col Maynard Mariano said the cause of the crash would be investigated. “We are on rescue mode right now,” Mariano told AFP.

The incident was being treated as an accident rather than an attack, the armed forces spokesman Maj – Gen Edgard Arevalo told DZBB radio.

Initial reports said the aircraft overshot the landing strip and broke into two, Western Mindanao command chief Lieut-Gen Corleto Vinluan told AFP. Most of the passengers had graduated recently from basic military training and were being deployed to the restive island as part of a joint taskforce fighting terrorism in the Muslim-majority region.

The military has a heavy presence in the southern Philippines where militant groups, including the kidnap-for-ransom outfit Abu Sayyaf, operate.

C-130 aircraft, the work horses of the air force, are used to transport troops and supplies. They are also deployed to deliver humanitarian assistance and disaster relief.

The crash was one of the country’s deadliest military aviation accidents. Sen Richard Gordon said it was the fourth this year with “mass casualties”. “Are we buying defective crafts w the people’s money?” he tweeted.

A Black Hawk helicopter crashed last month during a night-time training flight, killing all six onboard. Three pilots and three airmen died when their S70-i went down near the Crow Valley training range north of Manila, prompting the grounding of the entire fleet.

The country ordered 16 of the multi-role aircraft from a Polish firm that made them under licence from the Sikorsky division of US defence manufacturer Lockheed Martin. Eleven have been delivered since late 2020.