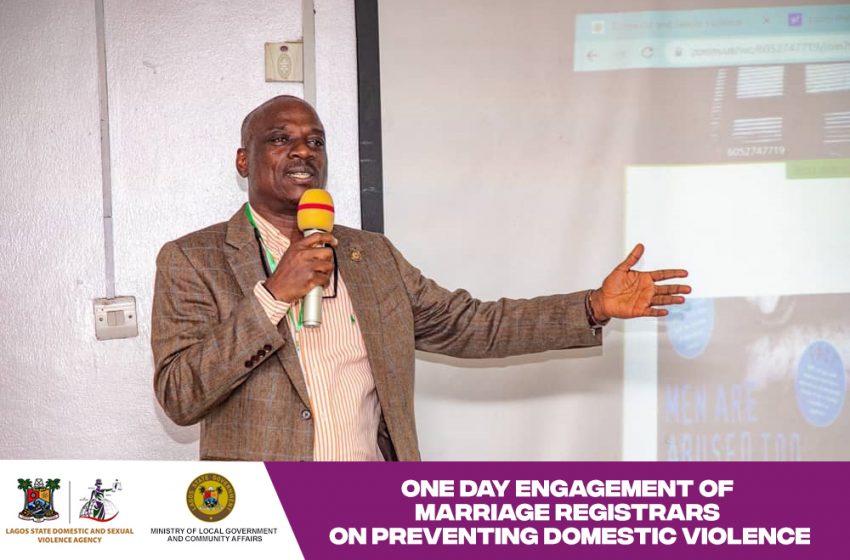 The Lagos State Government has expressed readiness to introduce compulsory Marital Effectiveness Preparatory Counseling for intending couples to ensure they are enlightened about all matters relating to Domestic and Sexual Violence in the State.

Permanent Secretary, Ministry of Local Government and Community Affairs, Mrs. Kikelomo Sanyaolu, spoke about the initiative during a programme held at the Lagos Chamber of Commerce and Industry, CBD, Alausa, for all State Marriage Registrars.

Sanyaolu, represented by the Director, Department of Local Government in the Ministry, Mr. Razaak Amodu, commended the Agency for its efforts in curbing domestic and sexual violence in the State, just as she pledged continued support for DSVA in eradicating domestic violence in Lagos State.

Earlier, the Executive Secretary of DSVA, Mrs. Titilola Vivour-Adeniyi, noted that at least 60% of survivors of domestic violence who had contracted their marriage under the Matrimonial Causes Act, knew about the abusive tendency of their intending spouses but still proceeded with the union.

Vivour-Adeniyi pointed out that these red flags, among others, necessitated the need for Marriage Registrars to provide more professional support to intending couples.

Facilitators at the programme, including Mrs. Tinuke Odukoya, Executive Director, Centre for Women’s Health and Information; Mr. Oladele Emmanuel Temilade, Founder, Institute of Marriage Administrators & Counselors of Nigeria and the Founder of Family Life Engineer, Praise Fowowe, took the participants on emerging issues such as gender and sex roles, understanding domestic violence, statutory roles of marriage registries, family system engineering as well as an introduction into the curriculum of the Lagos State Marital Effectiveness Preparatory Counselling.

A participant and the National President of Local Government Registrars of Marriage in Nigeria, Mr. Deji Sokeye, reassured the State of their commitment to embracing the laudable initiative towards the eradication of domestic and sexual violence in the country.

A total of 120 Marriage Registrars, including their deputies across Lagos State, attended the programme organised by the Lagos State Domestic and Sexual Violence Agency (DSVA) in conjunction with the Ministry of Local Government and Community Affairs.