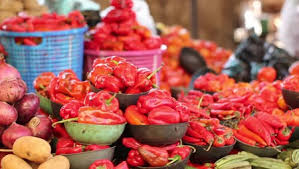 Lagosians have been advised not to panic following reports that trucks conveying food from the North are stuck on the way.

There is no need for anxiety, Lagos State Commissioner for Information, Mr. Gbenga Omotoso, has assured Lagosians, saying food security is guaranteed, despite the crisis.

Speaking as guest on “Daily Digest with Jimi Disu”, a programme on Nigerian Info 99.3FM, on Tuesday, Omotoso said the government was not ignorant of the food supply situation and assured citizens that it would not be allowed to become a crisis.

Asked what the government was doing about the matter, he replied: “The government is aware of the situation and Governor Babajide Sanwo-Olu is on top of it. He has initiated steps to ensure the matter is resolved by the weekend”.

Told that the situation should not go on till the weekend as food prices were rising, the Commissioner replied: “I assure you Governor Sanwo-Olu is on top of the matter. There will be a meeting. He will tell both sides to embrace peace in the interest of all.’’ He also urged residents to “take it easy” as Lagos State would continue to put facilities in place to ensure self-sufficiency in food production and supply.

The crisis emanated from the clash of traders in Ibadan. Food and cattle merchants from the North have withheld supplies, an action that has sparked rising prices. Lagos consumes at least 50% of agricultural products in Nigeria.

On the return of Lekki Concession Company(LCC) to the Lekki Toll Gate, the Commissioner said that contrary to the misconception in some circles, the facility will not resume tolling soon, considering its destruction during the #ENDSARS riots.

He envisaged that it would take months before the toll gate could be put in shape for full operations. “Even then, there will be a better tolling system, with the use of technology,” Omotoso said. He said repairs would leverage technology for better travel experience to eliminate time wastage and what the anchor of the programme, Mr. Jimi Disu, describes as “stress”.

Omotoso assured Lagosians that Governor Babajide Sanwo-Olu would not do anything to make Lagosians uncomfortable – in reply to a question that the toll gate was “causing stress”.