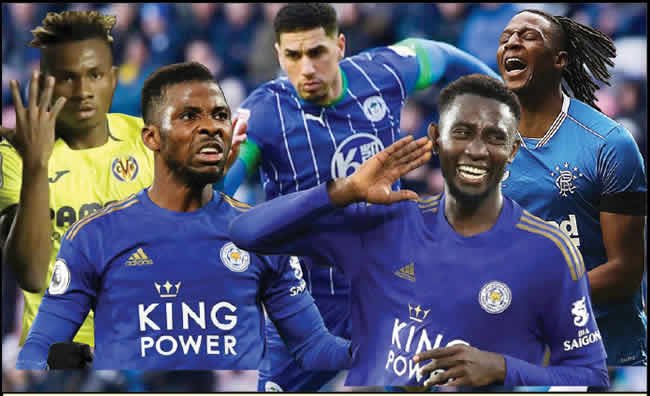 Top Nigerian footballers abroad were in action during the weekend. JOHNNY EDWARD and KELVIN EKERETE bring you their scorecard

Kelechi Iheanacho created two chances for Leicester City in 86 minutes of action in their 2-1 win over Frank Onyeka’s Brentford City in the English Premier League on Sunday.

Iheanacho is yet to get a league goal for the Foxes in his last six appearances. He has made 18 EPL appearances for Leicester this term, scoring two goals and providing three assists. His compatriot Onyeka was an unused substitute for Brentford while his teammates Wilfred Ndidi, who is injured, and Ademola Lookman were not listed for the game.

Alex Iwobi, Everton’s hero in their 1-0 win over Newcastle United mid-week, was in action for 17 minutes but could do nothing as the Toffees lost 4-0 to a rampant Crystal Palace side in the quarter-final of the English FA Cup on Sunday.

The forward, who is out of the Qatar 2022 World Cup play-off against Ghana, came on for Seamus Coleman in the 73rd minute.

Iwobi has scored three goals and provided two assists in 21 games for the Toffees this season.

Eagles targets Eberechi Olise and Michael Olise were both in the starting line-up for Crystal Palace. Eze came off for Luka Milivojevic in the 71st minute, while Christian Benteke replaced Olise in the 83rd minute. Olise provided the assists for the opening goal scored by Marc-Israel Guéhi.

Ajayi played all 90 minutes for the Baggies, who snatched a late draw at Bristol City on Saturday. It was his 24th game in the English Championship this term, scoring once with an assist. The point extends the visitors’ unbeaten run to four and leaves them 12th, seven points from the final play-off place, with eight games remaining.

Osimhen scored a second half brace to help Napoli beat Udinese 2-1 at the Stadio Diego Armando Maradona on Saturday.

The striker scored in the 52nd and 63rd minutes. The goals took his tally to 11 in 20 Serie A games this season, equaling countryman Obafemi Martins’ goal record set in 2004/05 season.

He also became the first Nigerian to score in double figures in two consecutive Serie A campaigns having scored 10 goals in 30 league games in his debut season.

The brace equals the goal record set by other African players George Weah for AC Milan, Samuel Eto’o for Inter Milan and Mohamed Salah for AS Roma.

Napoli are currently second with 63 points from 30 games.

Defender Destiny Udogie made his 24th league appearance of the season for Udinese, who lost 2-1 to Napoli. He was cautioned in the 50th minute but Isaac Success was not listed.

Striker Ighalo fired a first half hat-trick for Al-Hilal in their 4-2 win over Al-Ahly Saudi in the Saudi Arabia Professional League on Friday.

The treble took his tally to 19 goals in 24 league games this season.

Ighalo opened the scoring in the 11th minute, while the second was scored in the 34th minute. He completed his first hat-trick for Al-Hilal in the 45th minute after latching on to a perfect pass from a counter-attack before beating the goalkeeper from close range.

The Nigeria international made way for Matheus Pereira in the 84th minute of the win.

Innocent Bonke and Terem Moffi were in the starting line-up in Lorient’s goalless draw against Strasbourg in the French Ligue 1 on Sunday.

Bonke, who joined the French side in January, has been a mainstay in the team’s midfield. It was his seventh appearance for the side. His countryman Moffi has made 28 appearances, scoring four goals and providing three assists. While Bonke was on for the entire duration of the game, Moffi made way for Enzo Le Fee in the 64th minute.

Simon could not help as Nantes suffered a 1-0 loss at home to Lille in Ligue 1. Amadou Onana’s 41st-minute strike sealed victory for Lille. The Nigerian played for 87 minutes before he was replaced by Wylan Cyprien.

The 26-year-old created four scoring chances – the most chances in the match, made four key passes, completed just one dribble and attempted one shot in the encounter. Simon has scored three goals and assisted seven in 23 appearances this season in Ligue 1.

Awoniyi fired blanks while in action for Union Berlin, who were thrashed 4-0 by reigning Bundesliga champions, Bayern Munich.

The Nigerian, who was on the pitch for just over an hour, created two chances, made two passes and attempted two shots as a Robert Lewandowski double inspired the Bavarians to a comfortable win at home. He has made 24 Bundesliga appearances scoring 11 goals with an assist.

Olanrewaju grabbed the equaliser for Sivasspor in their 2-1 comeback win over Altay in the Turkish Super Lig on Sunday. It takes his goals tally to five in 25 league games.

Martin Rodriguez had put Altay in front in the 54th minute before Olanrewaju scored the equaliser in the 78th minute. Substitute Mustapha Yatabare grabbed the winner in the 91st minute.

The Nigerian was in action for the entire duration of the game.

Chidozie Awaziem made his 19th Super Lig appearance for Alanyaspor, who defeated Goztepe 2-0 to compound their relegation troubles. The defender is on the seven-man standby list for this weekend’s World Cup qualifying play-off against Ghana.

Goalkeeper Francis Uzoho was left on the substitute bench as Omonia Nicosia earned a 1-1 draw at AEL Limassol. The 23-year-old has conceded 21 goals in 13 games this season, keeping only three clean sheets. His compatriot, Abdulahi Shehu, was not listed for the game.

Dessers was in action for 76 minutes and provided an assist, but it was not enough as Feyenoord fell 3-2 to champions Ajax in the Dutch Eredivisie on Sunday.

It was his 20th league game of the season since joining the club from Belgian giants Club Brugge in the summer on a season-long loan deal. Dessers, who has found the net 14 times in 36 appearances in all competitions this season, was replaced by Bryan Linssen.

Okoye kept his fifth clean sheet of the Eredivisie season for Sparta Rotterdam, who forced a goalless draw at NEC Nijmegen.

The 22-year-old made five saves, two of which were from shots inside the box, to keep his second clean sheet in March. He has conceded 29 goals in 21 league games this season.

Leon Balogun, Joe Aribo and Calvin Bassey were all in action in Glasgow Rangers’ 2-1 comeback win over Dundee FC in the Scottish Premier League on Sunday, as they pile on the pressure on league leaders Celtic.

Bassey was in the starting line-up for the Gers and was in action for the entire duration of the game, while Aribo and Balogun came on as substitutes.

Aribo replaced Scott Arfield in the 46th minute while Balogun played just three minutes after coming on for Alfredo Morelos in the 87th minute of the win.

Young midfielder Akinkunmi Amoo scored the all-important goal for Copenhagen in their 1-0 win over FC Nordsjaelland in the Danish league to extend their position on top of the league table.

Amoo made way for Roony Bardghji in the 60th minute, while Mukairu was replaced by William Boeving in the 46th minute.

Stephen Odey scored from the penalty spot to hand Randers a hard-fought 1-1 draw at SoenderjyskE in the Danish topflight on Sunday.

It was a second consecutive goal for the Nigerian, who broke his seven-game goals drought last week against Silkeborg IF.

It was his seventh league goal of the season in 15 appearances for Randers. Odey was on for the entire duration of the game, while his compatriot Tosin Kehinde came off in the 90th minute for Filip Bundgaard Kristensen.

Onyedika played the entire 90 minutes in FC Midtjylland’s 1-0 win at Silkeborg in the Danish League on Sunday.

The midfielder made four successful tackles and created two chances in his 22nd league appearance. The 21-year- has scored two goals and provided one assist. Midtjylland are currently second on the league table behind FC Copenhagen.