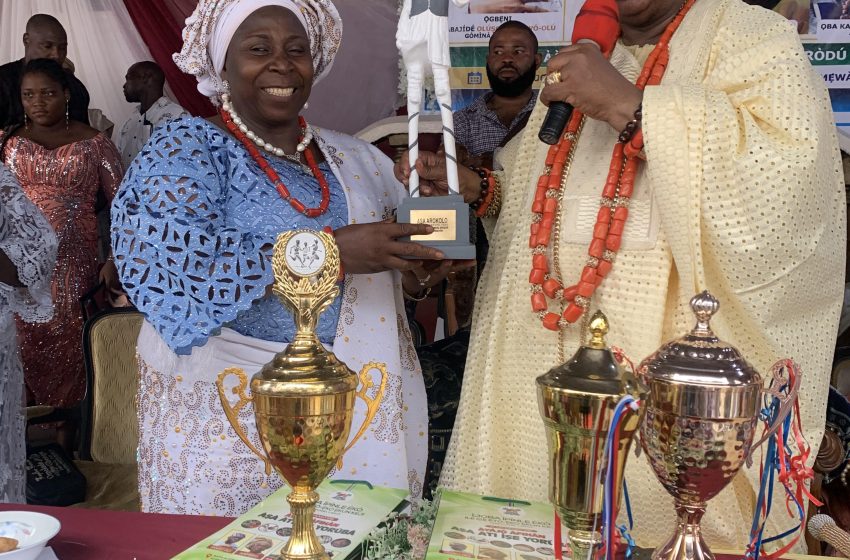 The Lagos State Education District II has celebrated its Y2022 Arts and Cultural Day at the Palace of the Ayangburen of Ikorodu, Oba Kabiru Shotobi, with a rich display of different cultural performances, cooking competition and recitations of indigenous chants and poems.

Addressing participants at the event, the Honourable Commissioner for Education, Mrs. Folasade Adefisayo, maintained that the gathering nullifies the views of some proponents insinuating that the Yoruba Language and Culture will soon go into extinction.

Mrs. Adefisayo, who was represented by the Permanent Secretary in the Ministry, Mr. Abolaji Abayomi, counselled that such initiatives as the regular celebration of Yoruba Cultural Day and other related events can rejuvenate the Yoruba Culture and should be sustained.

Emphasising the need to jettison the opinion of naysayers, Mrs. Adefisayo said, “If we don’t want their propositions to come to pass, we all must rise up to the preservation of our culture and language more than ever before. We should take it as a challenge to deliberately promote the writing and speaking of Yoruba language wherever we go”.

The Commissioner berated parents who have turned Yoruba into a second language in their various homes, just as she frowned at how the language is referred to as vernacular in many institutions of learning.

While noting that whatever we do secretly without carrying the younger ones along will not see the light of the day, the Commissioner applauded the efforts of the Tutor-General/Permanent Secretary of District II, Mrs. Anike Adekanye, who is also the President of the Association of Akomolede Yoruba, for the warm embrace given to the promotion of Yoruba Language and Culture in the District.

In her remarks at the event, the Tutor-General/Permanent Secretary of Education District II, Mrs. Anike Adekanye, maintained that the District has set a pace for other schools in the State to emulate and replicate in their schools, such that the consciousness of every Lagosian can be awakened to promote the indigenous values, practices and culture of Lagos State

She attributed the improvement of students in the Yoruba language at both internal and external examinations to the employment and deployment of more Yoruba teachers by the administration of Governor Babajide Olusola Sanwo-Olu to different schools across the State, saying that the gesture had further strengthened the preservation of the Yoruba Culture.

Mrs. Adekanye thanked Governor Sanwo-Olu for throwing his weight behind the event and also appreciated the Ayangburen of Ikorodu, Oba Shotobi, for supporting the initiative.

Also speaking, His Royal Majesty, the Ayangburen of Ikorodu, Oba Kabiru Shotobi stated that countries like China, Russia and India use their local languages to teach and impact knowledge to pupils in their various countries and expressed the need for Nigeria as a country to also think in that direction in no distant time.

The traditional ruler extolled the rich potentials in the Yoruba Culture and the edge that it has over other cultures and indigenous languages, revealing that some foreigners are now learning how to speak the language and also emulate or copy Yoruba traditional practices.

As part of the celebration, students from different schools within Education District II competed in the preparation of different traditional cuisines such as Afon, Ebiripo, Abari, Ikokore, Ofada rice, Ojojo, Eko, Moin Moin and Asaro among others.

At the end of the Traditional Food Competition, Yewa Senior Grammar School, Ikorodu, came first with Afon meal which is one of the traditional cuisines of Ikorodu people; Oriwu Senior Model College, Oriwu came second with the preparation of Abari and Akara Oka (Moin Moin Alagbado), while Majidun Senior Grammar School clinched the third position with Asaro and Shrimps Soup.

The event was attended by several traditional rulers within the Ikorodu division, cultural enthusiasts, members of the Association of Akomolede Yoruba, as well as teachers and students from various schools within the District.