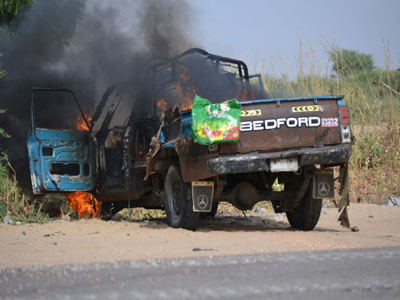 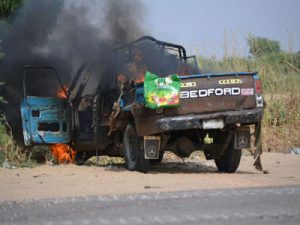 Eight suicide bombers in a Pick-up van have detonated their bombs, killing themselves in a failed attempt to cross a military checkpoint at Gubio, Gubio Local Government of Borno State, the Army has said.
According to a statement by Army spokesman Col. Sani Usman, the incident occurred about 9.15 am yesterday.
He said the insurgents got frustrated after troops insisted on searching the vehicle, and one of them detonated his Improvised Explosive Device (IOD).
The statement reads: “Troops of Operation LAFIYA DOLE deployed in a checkpoint in Gubio, Gubio Local Government of Borno State, about 9.15am this morning (yesterday), foiled a suicide attack on Gubio town by eight insurgents.
“The suicide bombers, who came in a Bedford Pick-up van, attempted to force their way through but were resisted by troops, who insisted that the vehicle be checked.
“They refused and detonated one of the suicide vests, killing eight of them.”
Troops of 8 Task Force Division, during Operation Hardknock, have rescued 19 women and 19 children from the northern axis of Borno.
A statement by its Deputy Director, Army Public Relation, Col. Onyema Nwachukwu, said: “The troops of 8 Task Force Division have begun an operation, codenamed “Operation Hardknock,’’ to clear pockets of Boko Haram terrorist hiding in remote areas of northern Borno, along the Nigeria-Niger border.
“As the operation progressed, troops cleared pockets of insurgents from their hideouts in Momo and Tunshe villages around Marte general area.
“The troops rescued 19 women and 19 children in Dumba. During the rescue operation, the troops neutralised six insurgents while others fled with gunshot wounds, leaving behind 22 motorcycles, flags and other items.”