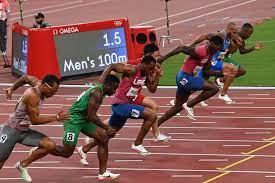 Reigning African Games 100m champion, Raymond Ekevwo, yesterday, moved close to ending Nigeria’s 12-year wait for gold by qualifying for today’s final as the 22nd African Athletics Championship got off to a bright start in Mauritius

Ekevwo made the final by breaking loads of sweat, as he could only finish third in the third semifinal heat, thereby missing one of the two automatic slots for the final.

The 23-year-old’s 10.15s run was, however, among the three fastest times achieved by those who missed the automatic qualification slots.

Kenya’s reigning African record holder, Ferdinand Omanyala, who recovered from an injury he copped last week in the international athletics circuit, led the way once again with his 10.07s performance with defending champion, South Africa’s Akani Simbine, the second-fastest qualifier for today’s final.

Ekevwo will now need to run faster than the 9.96s he ran three years ago that fetched him the African Games gold to stand a chance of making the podium today.

The two other Nigerians did not make it to the final. Nicholas Mabilo failed to get past the first round heat, while Seye Ogunlewe exited at the semifinal stage, finishing fourth (10.29) in the first semifinal heat.

In the women’s 100m event, Tima Godless ran a huge Personal Best to make the final. She ran 11.25 seconds to rekindle hopes of another Nigerian win eight years after Blessing Okagbare won the country’s last gold medal in the event.

Godbless came second in her semifinal heat behind one of the pre-championship favourites, Carina Horn of South Africa, who won in 11.08s.

The Nigerian will need to run another huge personal best to stand a chance of making the podium today.

Meanwhile, two other Nigerians in the event, Praise Ofoku and Balkis Yakubu, failed to advance to the final despite the latter running a new11.63s personal best.

While Adeyemi secured one of the three automatic slots on offer, Nathaniel and Nnamani qualified as two of the fastest ‘losers’.