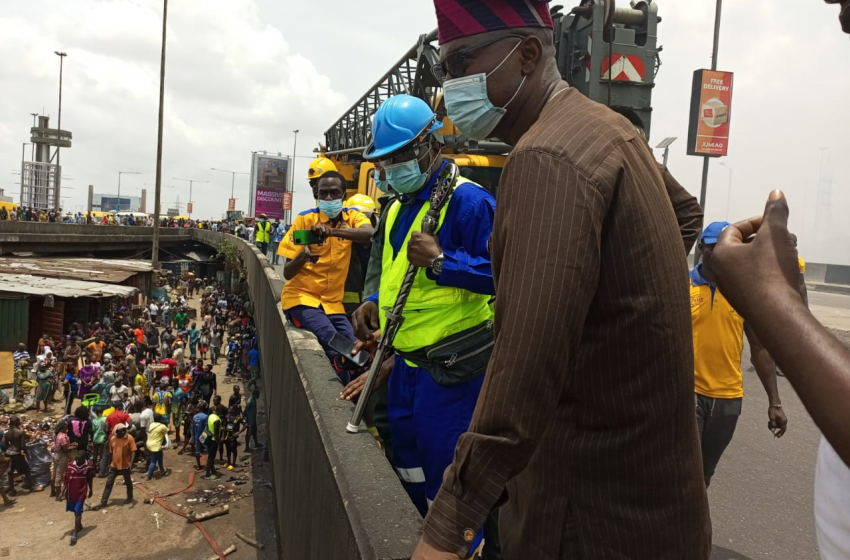 Following the morning fire incident that engulfed some makeshift shops and containers under the Eko Bridge at Oke Arin, Apongbon on Wednesday, thereby affecting some parts of the bridge, the Lagos State Government has issued a 48 hours notice to squatters under the Bridge to vacate the area.

The Special Adviser to the Governor on Central Business Districts, Mr. Gbenga Oyerinde, issued the directive to illegal occupiers during his official visit to the scene after the fire had been extinguished and the removal of debris had commenced.

Oyerinde decried the illegal activities of squatters, traders who store items beneath the bridge and engage in other business transactions, warning that anyone caught flouting the directive to stay clear of underneath the bridge will be arrested and prosecuted.

In his words: “The issue of fire outbreak under the Eko Bridge at Oke Arin may become endemic if adequate steps are not taken to forestall future occurrence due to negligence and non-adherence to safety protocols by traders, leaders of the market associations and CDAs after several engagements on the need to take issues of safety seriously”.

Commending the men of the Lagos State Fire Service for the quick response and putting out the fire fastidiously, the Special Adviser averred that the cause of the fire outbreak has not been fully ascertained, but suggested that it may be due to the storage of explosive and combustive materials in some of the containers stored under the bridge.

Oyerinde visited the scene of the incident alongside the Permanent Secretary, LASEMA, Dr. Olufemi Oke-Osanyintolu and other State Officials.