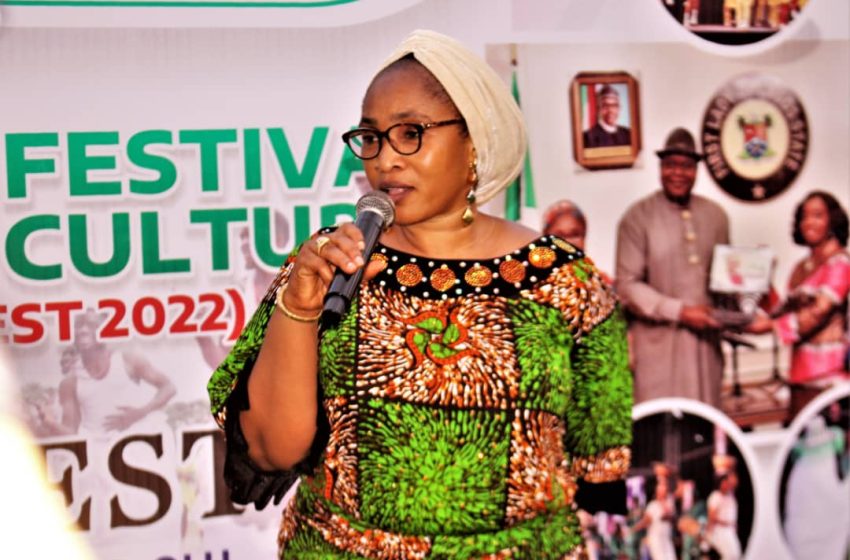 Dr. Sanwo-Olu, who also doubles as ‘Mama Nafest’, hosted the children at a reception held on Friday at the Lagos House, Marina, said the event was a way of giving the children an experience that they would cherish for a long time.

She commended the platform created by NAFEST for cultural integration, particularly the initiative of allowing children to take part in the Cultural Festival, saying that the platform has nurtured the children to appreciate and value the diversity in the nation’s cultures.

According to her, the hosting of the children participants at the Eko Nafest 2022, shows the importance that Lagos State attaches to issues that concern children as leaders of tomorrow.

Speaking on the gift items presented to some of the children which include Laptops and Tablets among others, the Governor’s wife noted that the biggest gift any of the children could receive is exposing them to some historical artefacts of Lagos State and Nigeria, which would remain indelible in their hearts.

She informed the children that the gift items will further enhance their skills in Information Communication Technology as well as sharpen their digital knowledge thereby contributing significantly to their academic performances.

Dr. Sanwo-Olu revealed that the decision to take the children on a tour of the Parliament Building within the Lagos House, Marina was deliberate and intentional in order to give the children a sense of history.

Her words: “I believe that if our children know where we are coming from as a nation and the history of past governments, it will be easier to know where we are going to, thus the choice of this place as the venue for this short reception organised for these children”.

Speaking on the theme for the 2022 NAFEST: “Culture and Peaceful Co-Existence”, the First Lady called for a return to the culture of communalism against living in isolation, enjoining everyone to show concern to others, especially on things that constitute threats to fellow humans.

The First Lady also advised the children to be ambassadors of peace and communalism in their respective states by ensuring that all the values inculcated into them through the Eko Nafest 2022 are internalised and applied in their daily activities.

The Director-General of the National Council for Arts and Culture, Otunba Olusegun Runsewe said that the First Lady has extended her love and care to children participants at the ongoing Eko NAFEST as a Medical Doctor and Mother.

He assured the First Lady that the warm reception given to the children would be a life-changing experience for them and would be cherished by them for several years to come.

On her part, the Commissioner for Tourism, Arts and Culture, Pharm. (Mrs.) Uzamat Akinbile-Yussuf expressed satisfaction with the visit, saying that the children were able to learn more about Lagos and Nigeria.

Akinbile-Yussuf also appreciated Mama Nafest for the reception and for making herself available to receive the children despite her tight schedule, alongside the State Governor, Mr. Babajide Olusola Sanwo-Olu who also joined the children during the photo session.

As part of the visit to the First Lady, the children were taken on a tour of the Parliament Building at Marina, in batches. The children were also entertained by Footprints of David, a multiple award-winning children/student dance theatre group with vast experience in theatrical performances.