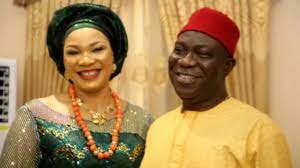 The Specialist Crime Team of the Metropolitan Police in London has arrested a former Deputy Senate President, Ike Ekweremadu, and his wife, Beatrice.

They were arrested for alleged conspiracy to harvest the organs of a child, who is currently in protective custody.

If convicted, the couple may get a maximum of life sentence or 12 months imprisonment or a fine or both on summary conviction under the United Kingdom’s Modern Slavery Act 2015.

A statement by the Metropolitan Police said, “A woman and a man were charged today (Thursday) with conspiring to arrange the travel of a child into the UK to harvest organs.

“The charges follow an investigation by the Metropolitan Police’s Specialist Crime team.

“[A] Beatrice Nwanneka Ekweremadu, 55 (10.9.66) of Nigeria is charged with conspiracy to arrange/facilitate travel of another person with a view to exploitation, namely organ harvesting.

The station reported, “The alleged victim, in this case, is a homeless 15-year-old boy who was brought to the UK by Mr and Mrs Ekweremadu off the streets of Lagos, Nigeria.

“They are both charged with conspiracy to arrange or facilitate the travel of another person with the aim of exploitation, namely organ harvesting.

“They conspired to bring a child from Nigeria, a 15-year-old boy to harvest his organ; the boy was promised a better life. The prosecutors told the court that the former Deputy Senate President procured a passport for the boy and claimed he was 21 years old but discovered that he was 15 years old.

“The court learnt that Ekweremadu’s daughter had been battling with kidney failure and has been on dialysis for a while and needed a kidney transplant. So, the boy was brought in to give one of his kidneys to the daughter.”