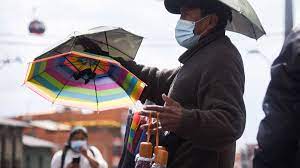 (La Paz)Bolivia’s highlands city of La Paz has been hit by an unusual heatwave, with levels of ultraviolet (UV) radiation soaring off the charts, exacerbated by unusually low levels of cloud cover some experts link to climate change.

Levels of UV radiation have at times in recent weeks hit 21 on a scale that normally only goes up as far as 20. According to the World Health Organization, a UV index of 11 is regarded as “extreme,” with people cautioned to avoid exposure to the sun.
“The sun is burning. This sun isn’t normal,” said La Paz resident Segundina Mamani, as people in the city at 3,600 meters (11,800 feet) above sea level tried to keep cool by eating shaved ice and keeping to the shadows.
The high-altitude Andean regions of South America can be hit by some of the most dangerous levels of UV radiation in the world, with numbers that have at times reached record heights of above 40 on the index. But a number between 11 and 17 is more typical.
“This is an issue that has literally had La Paz cooking,” said Juan Pablo Palma, a risk management official with the municipal government.
With world leaders meeting in Glasgow for the COP26 climate conference amid warnings that the climate light is flashing red, some Bolivian scientists said changing rainfall patterns were sharpening the effects of UV radiation by reducing cloud cover.
“We have confirmed what many say: the rainy season can bring the same amount of rain but it’s shorter,” said Luis Blacutt, a researcher at the atmospheric physics laboratory in La Paz, who has made climate change models to study the trend.
While some rains brought relief this week, the laboratory expects the high UV levels to last at least for another week.
“That means that the development of clouds is delayed, the input of ultraviolet radiation is more noticeable… Now that there are no clouds, we have an entry of a large amount of ultraviolet radiation that affects everyone,” said Blacutt.
Tags: uv damage