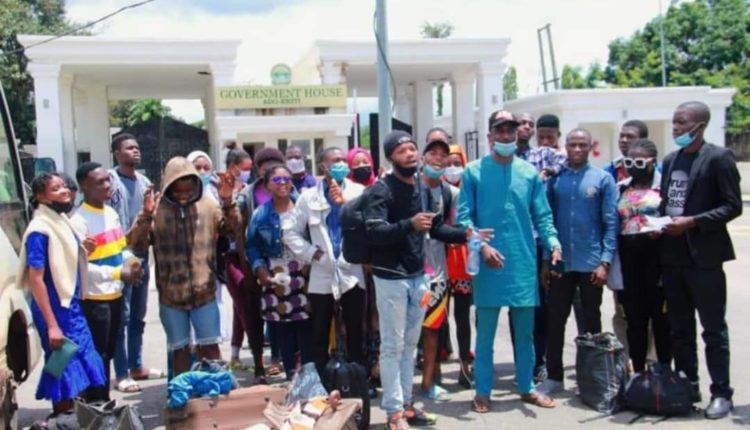 The Government of Ekiti State has successfully evacuated 28 students who are Ekiti indigenes from crisis spots in Jos, Plateau State following the security challenges that occurred in the North Central State during the past week.

Akin Omole, Commissioner for  Information and Values Orientation who made this known via a statement in Ado-Ekiti said “the operation was carried out with the support of security agencies who provided adequate security cover for the journey from Jos all the way to Ado-Ekiti.

“All the young Ekiti sons and daughters are in good health and delighted to be reunited with family members alive and well.

The statement added that the sensitive mission sanctioned by the State Governor, Dr Kayode Fayemi, was led by the Special Assistant to the Governor on Youth and Student Matters, Mr Moses Ademiloye, who safely returned to Ado-Ekiti, Sunday night with the young indigenes.

“On hearing of the plight of the stranded young Ekiti indigenes, Governor Fayemi spared no cost in facilitating the logistics and security required for their safe evacuation in line with the government’s commitment to the welfare, safety, and security of all Ekiti indigenes at home and abroad.

“One of the affected persons, Miss. Aina Tolulope was ecstatic in her appreciation of the governor’s efforts, for coming through for them when they felt all hope was lost, because of the suspension of academic activities, the curfew imposed, and the general state of insecurity.

“I am very happy to be home, and I am proud to be from Ekiti state and happy that we have a governor who goes the extra mile to ensure no one is left behind.  He has demonstrated expertise in governance and shown himself to be a father and a loving person. Thank you Governor Fayemi.”

“The Government of Ekiti State remains committed to safety, peace, and security in the state, and helping Ekiti indigenes outside the state to the best of our abilities.” It stated.