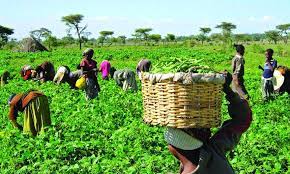 The new policy also bans foreigners and their representatives from purchasing agricultural commodities at the farm gates.

He disclosed that with the approval, the ministry will be inaugurating a committee that will review the existing trade policy, last updated in 2002.

“Council also approval “Trade Policy Action Plan”, that will utilise the existing national trade policy to facilitate an effective use of international trade and investment as tools for economic growth and poverty reduction in the country”

The minister stated that these were necessitated by the need for the government to establish an appropriate mechanism that would not only protect farmers in terms of achieving the right prices for their goods and commodities, but also ensure that they have the appropriate incentives and the needed encouragement to guarantee their continued participation in the farming business.

“ Foreigners have been going to the farm gates to buy farm produce from the farmers at low prices, thus, underpricing their produce and disincentivizing the farmers from continuing with their trade.

“So, we finally got approval from FEC today for only licensed local buying agents who must be registered by the relevant national commodity associations.

“They are the ones who will be able to buy goods directly from the farmers and sell to the foreigners.

The council also approved the “Trade Policy Action Plan”, that will utilise the existing national trade policy to facilitate an effective use of international trade and investment as tools for economic growth and poverty reduction in the country.

He disclosed that the Minister of Justice and Attorney General of the Federation has been directed to come up with a bill, which will be taken to a National Assembly, that will provide for the ways and means by which the policy will be effected.

According to the Minister, “ the theme of the action plan is “Unleashing Nigeria’s Development Potentials through Trade and Investment”.

The Minister noted that the plan is to boost revenue generation as the country is not making as much money as we used to from the sale of oil.

“ Due to the reduction in the money that comes from that aspect of Nigeria’s revenue generation, we want to utilize trade as a means of generating revenue for the country.

“So, we’ve got approval from Council today to engage with all the ministries, departments and agencies involved in trade and revenue generation, and also the organized private sector and civil society organisations to ensure a successful implementation of the trade policy action plan.

The Minister noted that the country was losing a lot in terms of money because of the activities of the foreigners who shortchanged the farmers.

“So we’re using their commodity associations which they long to, to monitor the situation and make sure that they get the right prices for their goods.