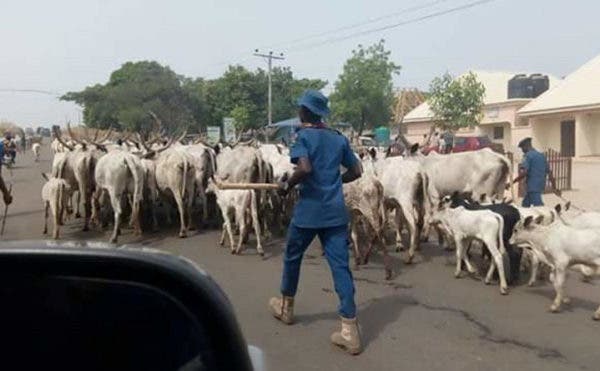 As the conflict between herders and farmers continues to rage, the Federal Government has disclosed mapping out 30 grazing reserves for implementation of the National Livestock Transformation Plan, NLTP, as a lasting solution to the crisis. This was made known by the Senior Special Assistant to the President on Agriculture, Dr Andrew Kwasari, while addressing journalists on the move by the government to solve the protracted conflict over the competition of land, water, and pasture by herders and farmers. According to Kwasari the NLTP is cardinal under the Green Initiative project, because it is a sure way to permanently settle the lingering crisis.

He said: “The National Livestock Transformation Plan, NLTP, is a sure way in solving permanently the issue of the farmer-herder conflict; the real farmers and herders that have conflict and mark my words, real farmers and real herders that are in crisis today is triggered for resources of land, water, and pasture.

The land is there, we don’t need to look for land anywhere. “The traditional rulers we consulted, like the Gbom-Gbom Jos, clearly advised, and said the low hanging fruit for federal and state governments is we make sure we settle pastoralists in gazette grazing reserves. “This takes away any notion of land grabbing or taking land from communities and giving to pastoralists because we are in volatile situation, hate speech and all of that.”

He further said that Nigerians need to understand and embrace the NLTP by following modalities of the plan. “If we are going to achieve this first of all Nigerians have to follow the signs that is clear to the NLTP, the methodology of NLTP as clearly pointed in the NLTP, and every state that adopts NLTP it is to its own reality; it is not conscription but if they do it this way it will modernise livestock production, modernize crop production, remove conflict, create dialogue, and create cohesion in communities”, he pointed. He also explained that “One of the targets we are working on here in the National Livestock Transformation Plan, and we know that working at the National Economic Council; the Governors working with technical experts crafted this policy.

“I have been secretary to that committee and I have been to all the States to collect data and meet with the stakeholders, I understand that if we implement the NLTP, truly as it was designed over the next 10 years we will handle the issue of genuine farmer-herder crisis completely because, one, NLTP is crafted to offer the opportunity on how livestock production is done and also how to farm cropping is done. “The NLTP starts by training and arm-holding the pastoralists in the northern livestock production system, teaching them how to grow the pasture, settling them in a systematic way and environmentally friendly pattern. Our pastoralists are willing to learn.”