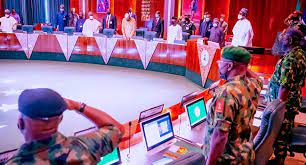 The Federal Government said yesterday that the  security situation in the country was not that dire to warrant the travel advisory issued by the United States and United Kingdom governments as well as other foreign missions.

It will be recalled that the countries issued the advisory, warning their citizens to avoid travelling to Nigeria, particularly Abuja, because of a potential terror attack in the city.

The government also allayed the fears of the citizens, as President Muhammadu Buhari had on his return from his official visit to South Korea weekend, down played the terror alert raised by the western countries, saying they had always issued such advisory to their citizens in countries across the world and that Nigeria would not be an exception.

The issue had generated so much anxiety in the FCT, especially after the UK and US had asked staff of their embassy and High Commission and citizens to leave the city.

But the National Security Adviser, NSA, Maj. General Babagana Monguno, retd, who stated this while briefing State House correspondents at the end of the emergency security meeting summoned by President Muhammadu Buhari, at the Presidential Villa, Abuja, yesterday, said Nigerian citizens are not in danger.

Monguno, who was flanked by the Minister of Foreign Affairs, Geoffrey Onyema, the Chief of Defence Staff, General Lucky Irabor, and the Director-General of the National Intelligence Agency, NIA, Ahmed Rufai Abubakar, said the panic that followed the US terror alert addressed to its citizens in Nigeria was unnecessary because the hype and the sense of insecurity it created were unfounded.

He urged Nigerians and other residents to go about their daily lives as usual, insisting that the security situation in the country is not as dire as the US and UK governments had painted.

The NSA also stated that the armed forces, security, and intelligence organizations were continuing with their mandate to keep every Nigerian and every area of the nation secured.

Monguno, who disclosed that the meeting basically was to discuss recent happenings within the FCT and certain declarations and alerts coming from various quarters insinuating growing insecurity and threat to security within Abuja and environments, assured that the country and the capital remained secured

He said:  “In rounding off, I will like to first and foremost, assure all the citizens of this country that any exaggerated sense of insecurity, any hype about a disintegration of our security forces, intelligence agencies, is unfounded.

‘’I want to assure Nigerians that so far, the situation has been under control, the intelligence and security agencies have made a lot of arrests.