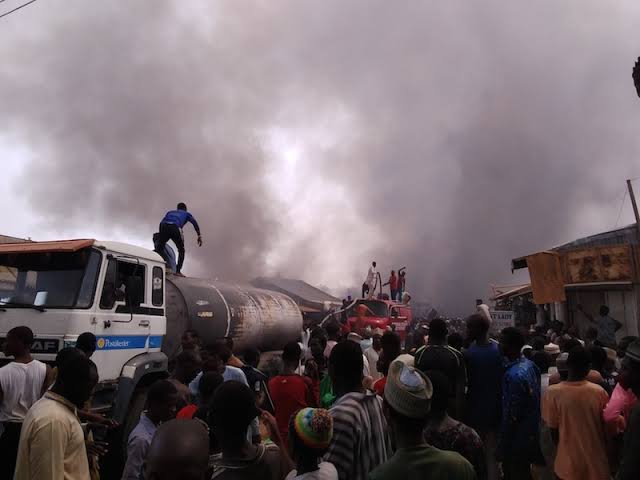 “It is a sympathy message that has to do with the unfortunate fire incident that has afflicted the Katsina Central Market yesterday. “President Buhari identifies with the state government and looking at the possibility of working together to see what can be done in terms of making necessary provisions as it relates to the people affected. “The Minister of Humanitarian Affairs and Disaster Management is part of the delegation for her to have first hand assessment on the level of damage caused by the disaster so as to provide palliatives to victims and proffer solutions.
“The President share with you in prayers, for God to replenish what was lost,” he said. In his remarks, Gov. Aminu Masari, said the incident occurred around 8am, adding that “we thank God, had it been in the night, no one know what would have happened”. He also commended the Federal and state fire services for their efforts to put off the fire. Masari said that for now, no one could say the number of people affected, the shops and property destroyed. The governor said the government would make an assessment and take measures to forestal future occurrence. The News Agency of Nigeria (NAN) reports that other members of the delegation were ministers of Interior, Rauf Arabgesola, Police Affairs, Maigari Dingyadi, Aviation, Hadi Sirika as well as Garba Shehu, Senior Special Assistant to the President on Media.