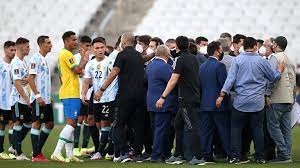 The match was called off amid extraordinary scenes as officials, believed to be from Brazil’s health authority stormed on to the pitch in Sao Paulo shortly after kick-off.

Their action was over an alleged coronavirus breach by the visiting team’s England-based players.

FIFA president Gianni Infantino described the situation as “crazy” on Monday, and the world governing body’s disciplinary committee will now investigate the circumstances which led to the suspension.

“Following the analysis of the official match reports related to the World Cup qualifier between Brazil and Argentina, FIFA can confirm that disciplinary proceedings have been opened involving both member associations,” a statement from FIFA read.

“The two teams were asked to provide further information on the facts which led to the suspension of the match, which will be gathered and then thoroughly reviewed by FIFA’s disciplinary committee. Updates will follow in due course.”

According to ANVISA, the Brazilian Health Surveillance Agency, Argentina’s four English Premier League (EPL) players are alleged to have declared false information on official forms to the country’s authorities.

The players are: Cristian Romero and Giovani Lo Celso of Tottenham and Aston Villa’s Emiliano Martinez and Emiliano Buendia.

In doing so, they are deemed to have broken quarantine rules.

The Spurs duo can expect to be fined when they return to club duty, it was gathered.

Top-flight and EFL clubs had announced they would not permit players to travel to countries on the UK Government’s COVID-19 “red list”.

This had prompted Infantino to write to Prime Minster Boris Johnson to request exemptions, which were not forthcoming.