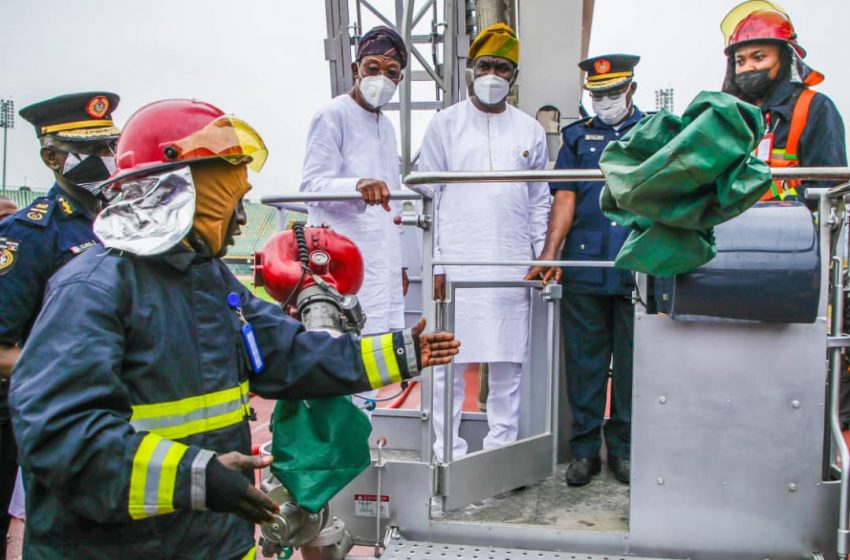 Lagos State Deputy Governor, Dr. Kadri Obafemi Hamzat has stressed the need for Nigeria to have a uniform Standard Law to serve as a guide for PMS Tankers as well as Articulated Vehicles as part of efforts to protect lives and property of the citizens from fire and accidents involving such vehicles.

Speaking at the commissioning of a modern Aerial Hydraulic Platform Mercedes Benz Fire Truck acquired by the Federal Fire Service Zone F, Lagos Command, on Wednesday, Dr. Hamzat noted that about 45 percent of vehicles carrying petroleum products on Lagos roads get involved in accidents, including fire incidents that destroy lives and property in the process.

He identified the need for the State to work with the Federal Fire Service to ensure that the required standards are met before the tankers load their products, saying that “life is the most important gift, without which nothing else matters; therefore, preventing fire incidents that can destroy lives and property should be of concern to every one of us”.

Speaking further, the Deputy Governor said the Sanwo-Olu led administration takes the issue of fire incidents seriously, noting that the State first bought its Aerial Hydraulic Platform Fire Truck as far back as 2012 and currently has four of them.

While reiterating the efforts of the government on fire services, Hamzat disclosed that about 700 firefighters are employed by the State with plans to recruit 500 more, revealing that 18 fire stations across also spread across Lagos.

Earlier in his remarks, the Minister of Interior, Ogbeni Rauf Aregbesola stated that the Federal Government is committed to safeguarding lives and property and will not relent in its effort towards making policies, resources and strategies for a safer Nigeria.

The Minister explained that, under President Buhari’s administration, Federal Fire Service has spread to nearly all the States of the Federation, adding that the Federal Government will keep improving on infrastructure and equipment in the bid to protect lives and property from fire incidents.

He also averred that the DG54 Aerial Platform Fire Fighting Truck is capable of reaching the 18th floor of high-rise buildings, which had been a challenge in Lagos, pointing out that firefighters will now be able to deal with any inferno in skyscrapers.

In his remarks, the Controller-General of the Federal Fire Service, Dr. Liman Ibrahim stated that fighting fires in high-rise buildings come with a lot of challenges, especially in Lagos, where the service had in the past contended with multi-story buildings without appropriate equipment.

“The procurement of the DG54 Aerial Platform Fire Fighting Truck has 54 metres height capacity and is expected to significantly address these challenges and minimise the risk firefighters are exposed to in the line of duty”, he added.