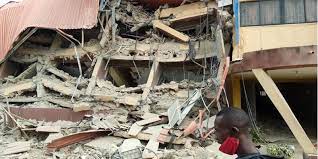 The Lagos State Government has directed that two floors marked from a building razed by fire recently at 39/45 Martins Street, Balogun, should be removed immediately by the developer, while an integrity test is carried out on the entire structure to ascertain its safety for occupants.

The General Manager, Lagos State Building Control Agency (LASBCA), Gbolahan Oki, gave the directive on Friday during a meeting with the developer of the affected building, Brasas Plaza, and other stakeholders at the agency’s headquarters in Ikeja.

Speaking further, Oki said the results of the test would determine if the entire building would be pulled down to safeguard lives and properties in the area, adding that the government has mandated owners of buildings above two floors within the market and others on the adjourning streets to install fire safety gadgets in their structures.

According to him, the safety gadgets expected to be installed by building owners within the market include fire extinguishers, smoke detectors and others to prevent future fire disasters.

While warning that any building above two floors found without the installation of the safety measures would be sanctioned, the LASBCA boss maintained that all measures taken by the government are aimed at protecting the lives and properties of residents.

He stressed that the Agency would continue to carry out its responsibilities in accordance with the law which dictates that all structures within the state must be structurally fit and habitable.

The directive was in response to the demonstration by traders of the affected building, who appealed for the intervention of the state government to address the crisis that had trailed the inferno, especially its effects on surrounding structures.